"Pumbaa helps Timon pass his manhood tests so he can become a full-fledged meerkat."[1]

Pumbaa finds a letter for Timon from the Meerkitten Society. Timon swiftly snatches the letter from Pumbaa so that the warthog doesn't know what it's about and runs to his secret hiding place, but when he locks the door, he finds his friend already in the room.

Timon tells Pumbaa that it is one of the letters that states that he has never passed the Manhood Test and therefore, he is a Meerkitten. When Pumbaa teases Timon about being a Meerkitten, the meerkat tells his friend that it is difficult to pass the test as he has to earn a number of badges and he has to find an Official Manhood Test Judge, which is impossible to find. So Pumbaa becomes Timon's judge. Timon suggests that Pumbaa signs the manhood book right away so that he'll earn the badges, but the warthog refuses to do so as it is required for Timon to actually pass the test in order to earn them. Timon reluctantly agrees to do the test.

On the first test, Timon has to use a knot to make objects, which are a square, an anchor, the Eiffel Tower, and a rocking chair. On the second test, Timon makes a puppet and when he leaves to find Pumbaa, a fairy appears to turn the puppet into a real boy. The puppet becomes an ugly real boy and after he leaves, Timon comes back and finds him missing. When Pumbaa shows up and doesn't see the puppet, Timon tells the warthog that he made 100 puppets and then his nose turns into a tree branch because he lied, with Pumbaa telling him that he earned a Lying Badge.

On the third test, Timon bakes a cake for Pumbaa, but the warthog doesn't like cake. But then, a beautiful woman pops out of the cake, making Pumbaa sign the book. On the fourth test, Timon has to cut a big cheese. Pumbaa insists on helping him, but the meerkat insists that he can do it on his own.

On the seventh test, Timon has to cross the road. He looks both ways and as he crosses, the meteor from the previous test falls and lands on him. On the eighth test, Timon has to hike 50 miles. The meerkat doesn't think it's hard until Pumbaa puts various objects on his hiking bag. The objects cause Timon to fall off a cliff. After Timon lands underground (with only 49 miles to go according to Pumbaa), the same meteor falls and lands over the hole.

On the ninth test, Timon is dressed in army clothes holding a gun and standing next to a remote control. On the tenth test, Timon opens a can of soda and makes a big belch after he drinks it.

For the final test, Timon has to try to face the Cave of Manhood, but he chickens out, therefore refuses to enter and he runs to his "secreter" hiding place. Timon then reluctantly decides to enter the cave when Pumbaa teases him about being a meerkitten. When Timon gets to the cave, a hand comes out and grabs the meerkat, leading to a sort of chaos going on inside. Timon then comes out, looking very manly, symbolizing that he finally passed the Test of Manhood.

Timon gives Pumbaa a letter that is from the Wart-piglet society, which also states that he has to pass the Test of Manhood. The same hand comes out of the cave and grabs Pumbaa, leading to the same sort of chaos going on inside. 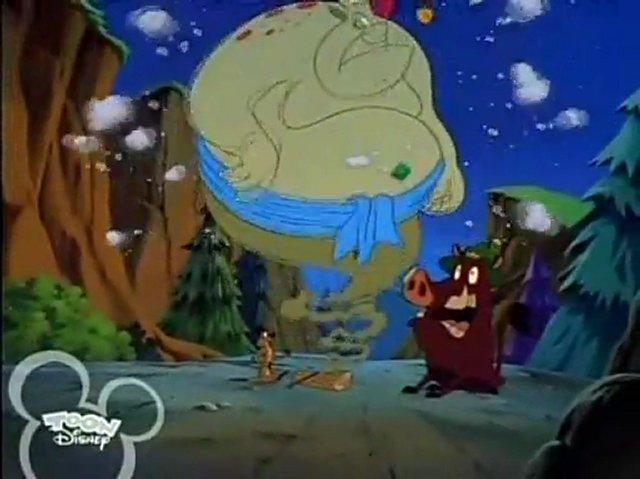