"Isle Find Out" is the second segment of the fourth episode of Season 2 of The Lion King's Timon & Pumbaa. It aired on September 16, 1996 on the syndicated Disney Afternoon block, alongside "Klondike Con".

"Timon investigates why a flock of flamingos is standing out on a sandbar."[1]

Timon observes a colony of flamingos standing around in a sandbar. Pumbaa shows up with a log with bugs inside, but Timon is more interested in the flamingos, telling his friend that they have been standing still for hours and that they are up to something, such as planning a big party with spotlights, disco music, fireworks, and conga line. Pumbaa tells Timon that the flamingos are probably just standing around, but the meerkat disagrees and suggests that he should find out what they up to.

For his first attempt to get to the flamingo's sandbar, Timon attaches two wild ducks to his feet, but Pumbaa suggests that Timon uses a boat instead, but the meerkat ignores the warthog's advice. When Timon gets on the water, the ducks fly off, passing the flamingo colony. For his second attempt, Timon then wears some wings he made to fly to the sandbar. But then, the wings go out of control and Timon flies around the sky, then goes under the sandbar the flamingos are standing on, then gets out of the shore, and then runs into an airplane. After the first two attempts failed, Pumbaa once again suggests that Timon uses a boat, and the meerkat agrees this time.

Timon and Pumbaa are now on a boat. After Pumbaa starts the motor, a storm comes and there are big waves coming to the boat, causing the boat to go up and down, and then water gets inside the boat, with Timon and Pumbaa believing that they're gonna drown. Timon drills a hole on the boat to let the water out, but instead, more water gets in, with the boat about to sink. The two give up and reluctantly decide to drown, but the boat doesn't sink and Timon and Pumbaa are okay. The storm goes away and it's almost nighttime. Pumbaa gets out of the boat and sees that all the water is shallow. The warthog tells Timon that the meerkat could have just walked across the water instead of going through all the trouble getting to the sandbar.

When Timon and Pumbaa arrive to the flamingo's sandbar, Timon scolds the birds for standing still for the whole day and that they are up to something, but the birds ignore the meerkat. After a few minutes, Pumbaa takes Timon back to the shore. Timon tells Pumbaa that he was right when he said that the flamingos were just standing around the sandbar and the two friends walk off. However, when the flamingos see that they left, they turn the sandbar into a stage and start a party with spotlights, disco music, and conga line, showing that Timon was right about them all along. 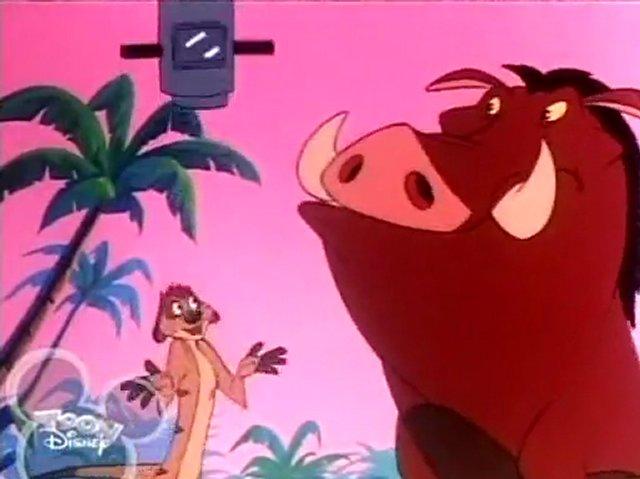