I Think I Canada

"I Think I Canada" is the first segment of the fourteenth episode of Season 2 of The Lion King's Timon & Pumbaa. It aired on October 21, 1996 on the syndicated Disney Afternoon block, alongside "Zazu's Off Day Off".

"Timon and Pumbaa are caught by a wolverine and coerced into signing up for his 'survival of the fittest' training camp."[1]

Timon and Pumbaa are relaxing on a hammock making puns about the different types of bugs they have been eating. Suddenly, a wolverine comes out of the bushes and chases Timon and Pumbaa.

The first step is for Timon and Pumbaa to remove all the fatty food out of their mouths into a bucket. Pumbaa does exactly what he is supposed to do while Timon only throws a small bug into the bucket. The wolverine makes a machine grab Timon and shake the meerkat so that all of his fatty food gets removed out of his body.

The second step is for Timon and Pumbaa to exercise. While Pumbaa is actually exercising, Timon uses different types of gimmicks to make it look like he's exercising as well when he's actually being lazy.

The third step is for Timon and Pumbaa to drink milkless milkshakes. Pumbaa drinks his milkshake while Timon pours his into a grass. Timon then sees that the milkshake makes Pumbaa stronger and the grass grows taller and punches the meerkat.

The fourth step of the program is the Massage-O-Matic, where two robots each give Timon and Pumbaa a massage. The fifth step is for Timon and Pumbaa to enter the Maze of Challenges. Timon volunteers to enter first, but he instead erases the word "start" which is on one side of the white line on the ground and writes the word "finish" on the other side of the line. The meerkat then goes to relax while it is Pumbaa's turn to enter the maze and prove himself worthy.

After Pumbaa succeeds all five steps and proves himself worthy, the wolverine reveals that there is a sixth step of the program and that step is for him to eat Pumbaa. Realizing that the fitness program turns out to be a fake, Pumbaa runs back with the wolverine chasing him. Pumbaa manages to miss all the weapons the maze has while the wolverine gets caught by every single one of them. After Pumbaa runs to Timon, the wolverine is exhausted, with Timon telling Pumbaa that he knew all these exercises would be bad for their health.

As Timon and Pumbaa leave the training camp, Pumbaa wonders what he will do with all his new muscles and Timon tells him not to worry about them and that pretty soon he will turn back to fat. 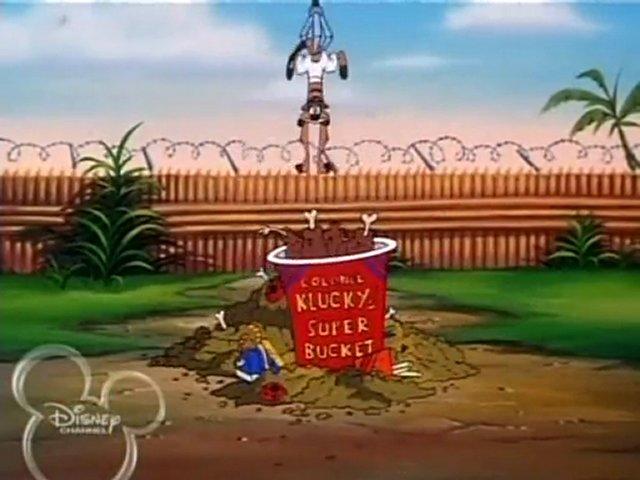