"I Don't Bolivia" is the second segment of the eighth episode of Season 2 of The Lion King's Timon & Pumbaa. It aired on September 30, 1996 on the syndicated Disney Afternoon block, alongside "Africa-Dabra!".

"The friends must capture Toucan Dan or face the wrath of the Vulture Cops."[1]

Timon opens a snail can getting ready to eat the snail. However, the meerkat has trouble chewing on the shell and tries various ways to make the snail come out. When nothing works, Pumbaa suggests that Timon has a toucan help him take the snail out of the shell. When Timon is about to do so, Pumbaa quickly warns him that the toucan is Toucan Dan, a dangerously clever criminal mastermind who can make anyone believe anything he says, according to the signs that surround the cage Toucan Dan is in.

Timon, however, doesn't believe the signs and asks Toucan Dan to help him anyway, but the toucan says that his name is Kronos and that he's from the future. Timon believes him, but Pumbaa tells Timon that it's a trick. Timon tells Pumbaa that he's not going to open the cage for Toucan Dan to escape. However, when Toucan Dan tells Timon that he has to go back to his future home, Timon believes him and opens the cage, with Pumbaa making his friend realize what he just did.

When Timon and Pumbaa are about to make a quick escape, the Vulture Police appear and tell the two friends that Toucan Dan escaped. They force Timon capture Toucan Dan and lock him in his cage, otherwise there will be some indescribable gruesomeness. Timon and Pumbaa find Toucan Dan hiding in a thorn bush and lock the toucan in his cage. But then, Toucan Dan tricks Timon into doing reverse psychology, making the meerkat accidentally free him and trap himself and Pumbaa in the cage.

Timon and Pumbaa recapture Toucan Dan, who was hiding in a volcano. Timon ties the rope around the toucan's beak so he will not tell another lie. However, he tricks Timon by doing sign language, which is telling him that he's Santa Claus and that he's about to deliver presents, making the meerkat free him once again. After realizing he got tricked, he suggests that he and Pumbaa should recapture Toucan Dan, but Pumbaa knows that he will make continuous escapes.

When Timon and Pumbaa see the Vulture Police return, Timon disguises himself as Toucan Dan to avoid the gruesomeness the police warned him about. The vultures then take "Toucan Dan" out of the cage and are about to feed him to the lions. Horrified, Timon tries to convince the police that he's not really Toucan Dan, but the vultures don't believe him, as they know that they should not fall for Toucan Dan's lies. Timon then tries to get Pumbaa to vouch for him, which he does until Toucan Dan shows up wearing a meerkat costume and claims that he's the real Timon. Timon and Toucan Dan then have Pumbaa try to decide which one of them is the real Timon, but the warthog is unable to figure out which one is telling the truth and comes up with a plan. 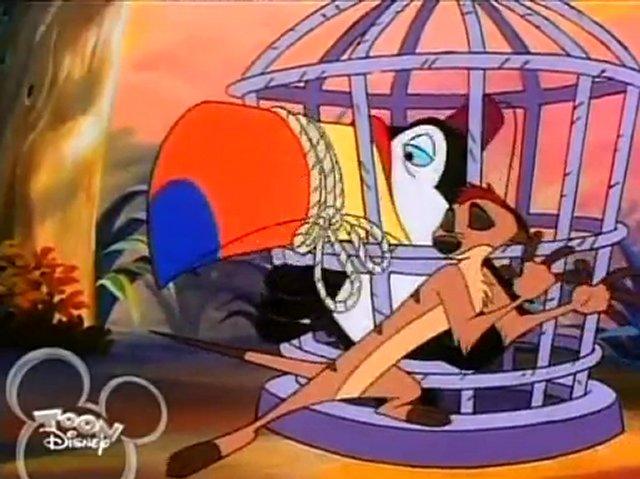