The Hyena Resistance is a group of hyenas who oppose Scar and his followers. They are led by Jasiri.

When Jasiri learns from her friend, Kion, that Scar has been resurrected, she rallies her clan to start a resistance against him. Together, they spy on Scar and his cronies and foil their attacks on the Pride Lands. However, Njano and Shupavu soon spot Jasiri convening with Kion, and they bring the news to Scar.

Scar orders Janja, Kiburi, and Reirei to lay a false trail for the Lion Guard, then surround the Hyena Resistance. At first, the plan works, but the Guard soon gets wind of the plot. They arrive and thwart the Army of Scar's schemes.

In the commotion, Janja falls into a lava pit and is saved by Jasiri. She offers him a place in the Hyena Resistance, and, after a moment of hesitation, he refuses and leaves.

With the Army of Scar defeated, Jasiri resolidifies her alliance with the Lion Guard.

The Hyena Resistance participates in the final battle against Scar and his army. The hyenas, as well as their allies the Pride Landers, are victorious. After the battle, Jasiri takes command of the Outlanders. 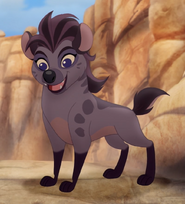 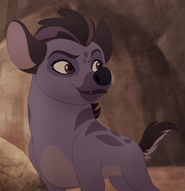 Madoa
Add a photo to this gallery
Retrieved from "https://lionking.fandom.com/wiki/Hyena_Resistance?oldid=291884"
Community content is available under CC-BY-SA unless otherwise noted.