"In this special two-part episode, Pumbaa's old warthog sounder is in danger and our duo go back to help."[1]

While Timon and Pumbaa traipse the jungle, Timon complains about his hunger, expressing that he could eat a horsefly. Pumbaa, taking Timon's expression literally, tells him that horseflies, as well as most other bugs, are scarce as the rainy season is almost here. The duo then sees a battered jeep covered with bugs and he and Pumbaa eat all the insects. The two then hear a distress call from warthogs and they go to another part of Africa to see where it's coming from. Timon and Pumbaa see a hut inhabited by a warthog sounder, which is surrounded by Guinea fowl, the warthogs' natural enemies. Pumbaa states that the Guinea fowl are there for the warthogs' supply of bugs and that the hogs are unable to leave the hut as the fowl can strip off their flesh in only ten seconds. This makes Timon want to leave, but Pumbaa suggests that they should save the warthogs since he answered the call.

Timon and Pumbaa use a long rope to get to the roof of the hut and as the two cross, each of them fall off and the Guinea fowl take half of their skins off. Meanwhile, three male warthogs believe that there is no one coming to their rescue and try to decide whether they should leave or stay in the hut. One of them states that they can neither leave nor stay: the reason for the former being that the guinea fowl will eat them and their supply of bugs and the reason for the latter being that the rain will flood the hut, causing them to drown. A pink female warthog named Sharla tells the three male warthogs that the storm is not upon them yet and they should start thinking of a solution. Then Timon and Pumbaa fall inside. The warthogs recognize Pumbaa. Pumbaa and Sharla haven't seen each other in years and state that they have never forgotten each other. When they are about to kiss, Timon interrupts and wants to know how Pumbaa knows the warthogs. Pumbaa tells the meerkat that the group of warthogs is his old sounder and they've banished him years ago because of his foul odor.

The three male warthogs smell his gas and force him to leave, but Sharla tells them to give him a chance since he and Timon came all the way here to save them from the guinea fowl. When Sharla asks Pumbaa what his plan is to get rid of the Guinea fowl, Pumbaa tells them to have Timon think of an idea since he's the "brains of the outfit." Timon says that in order to get rid of a Guinea fowl, they have to think like one. While the warthogs do so, he then tries to think of what the birds are afraid of and gets an idea.

Timon's first idea is to make Pumbaa dress up as a cook and scare the Guinea fowl away with cooking utensils, but it doesn't work. Timon's second idea is for him and Pumbaa to dress like cops and tell the fowl to leave, but the birds disobey. Timon's third idea is to hypnotize the fowl to make them go away, but instead, Pumbaa gets hypnotized and is about to leave, but the fowl go to him. Timon then comes up with an idea to use a Guinea Fowl Distress Call horn to make the fowls think there is trouble and leave the colony. However, when Timon blows the horn, the Guinea fowl that are not surrounding the hut think there's trouble and they show up to the hut, which makes the situation worse. Later that night, while the warthogs give up, Timon suggests that they should use something big enough to carry all the bugs and Pumbaa gets an idea of what to use.

Timon and Pumbaa are back to the jungle from earlier and go to the jeep.

Pumbaa states that using the jeep would be great idea but Timon complains that it would take weeks for it to be fixed unless they know how to fix it quickly, which gives Pumbaa an idea. He goes on an airplane that takes him to an auto school and flies back to the jungle, showing Timon his diploma that shows that he passed the auto test and is now ready to fix the jeep. Timon and Pumbaa repair the jeep and put gas on it.

After fixing the jeep, Timon and Pumbaa drive back to Pumbaa's sounders. Pumbaa sounders open their gate to make the jeep go inside and keep the Guinea fowl outside. It's now nighttime, and Pumbaa and Sharla are having a conversation on the roof. Sharla wants Pumbaa to stay with them, but Pumbaa says that he can't because of his odor and he's living a new life.

The next morning, Pumbaa's sounder puts the big bag of bugs on the jeep to distract the Guinea fowl. Pumbaa says goodbye to his sounder and he and Timon leave the hut with the jeep, with the Guinea fowl chasing them for the bag of bugs, which turns out that they are just as fast as the jeep. After fighting the guinea fowl to get them off the jeep, Timon and Pumbaa run into a cliff and they fall down. The two land safely and the bag lands and opens. Timon sees that the bag actually had firecrackers inside instead of bugs.

The firecrackers explode and turn the Guinea fowl into fried turkey. Pumbaa tells Timon that he put the firecrackers in the bag to fool the Guinea fowl while his sounder had the bag with the bugs inside, much to Timon's anger. Timon and Pumbaa hear the call again. However, this time the call means that the problem is solved. Timon tells Pumbaa that there was no point for him to help the warthogs, but Pumbaa points out that they get to keep the fried turkey and the jeep, which unfortunately breaks apart. The rainy season then starts, but it turns out to be a single cloud which only pours rain on Timon. 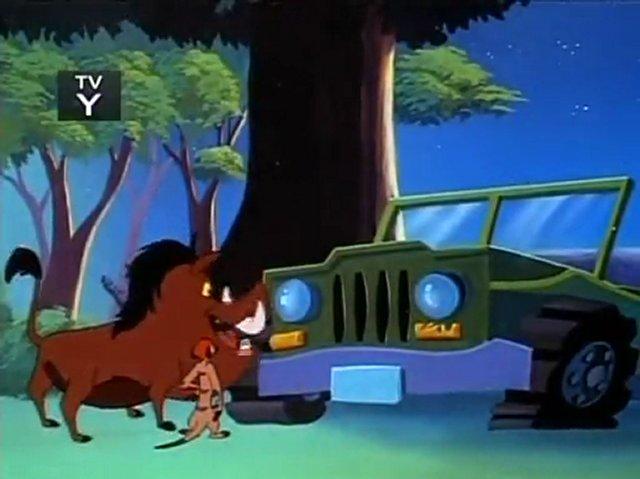 Retrieved from "https://lionking.fandom.com/wiki/Home_is_Where_the_Hog_Is?oldid=296586"
Community content is available under CC-BY-SA unless otherwise noted.