"He's a Bad, Bad, Bad Sport" is the first segment of the thirty-sixth episode of Season 3 of The Lion King's Timon & Pumbaa. It aired on September 3, 1999, alongside "Dapper Duck Burgers".

Pumbaa plays a game of chess with Timon. When he gets a checkmate, Timon claims that he wasn't paying attention and decides to start the game over, much to Pumbaa's excitement. However, Pumbaa ends up winning the next two games of chess, making Timon annoyed. The meerkat then states that he never liked chess and decides to play a different game.

Timon and Pumbaa now play a trivia game, where each one of them has to guess the answer to a question of a particular category their opponent asks them. Pumbaa gets the answers right while Timon gets them wrong. When night falls and Timon answers another question incorrectly, he decides to reshuffle the cards, believing that Pumbaa is getting all the easy questions, and suggests that he should go first. The category Pumbaa chooses is nature, with the question is to name the species of mongoose that lives in the Serengeti desert, to which Timon incorrectly replies that it is a warthog, when the answer is actually meerkats. Timon now becomes fed up with the trivia game and Pumbaa tells him that he knows a much better game they can play the next day.

Timon and Pumbaa play a game of Dart, where they have to shoot some arrows to a target. When Timon makes his shot and successfully hits the target, Pumbaa hits the target as well but passes through Timon's arrows, therefore winning the game. Timon and Pumbaa now play Ping-Pong, which Pumbaa also wins, much to Timon's disappointment.

Timon and Pumbaa then play games of Pool, Volleyball, Basketball, and Ice Hockey, and Timon loses to Pumbaa in every one of those games, getting to the point where he decides to quit playing with his friend.

When the unhappy Timon sits beside a tree complaining about losing every match he previously played with Pumbaa, Pumbaa tries to cheer him up by telling his friend not to feel bad and suggests to play another challenge, which is where he holds two straws and the one who pulls the longer one is the winner. When Timon pulls one straw, Pumbaa breaks his in half to make Timon believe he pulled the longer straw and therefore winning.

After Timon rejoices over his success, he tells Pumbaa not to feel bad about losing and the two friends get hungry. While they are on their way to fetch some bugs, Pumbaa tells Timon that he is always a winner when it comes to being his Bestest Best Friend. 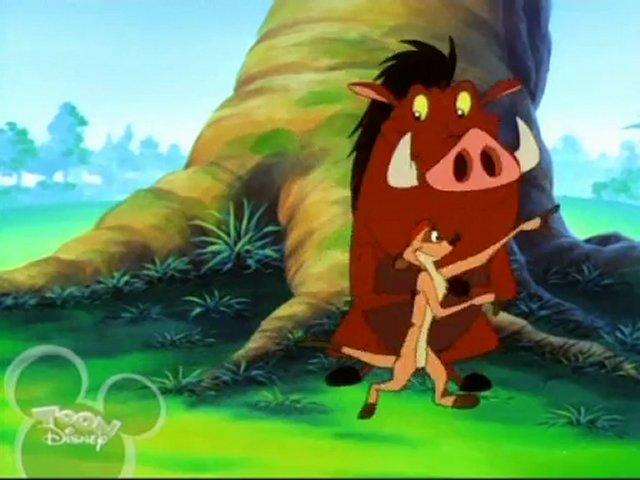