"Hakuna Matata U." is the second segment of the twenty-fourth episode of Season 3 of The Lion King's Timon & Pumbaa. It aired on June 11, 1999, alongside "Miss Perfect".

"Timon and Pumbaa open a university to teach others about Hakuna Matata."[1]

When the university opens, while Timon and Pumbaa are waiting for the students to arrive, Timon suggests that he takes half of the students while Pumbaa takes the other half. However, when the bus comes, only a smart owl named Ollie and a sloth, who’s name is later revealed to be Sam, show up, much to the duo’s disbelief. Timon decides to take Sam while Pumbaa takes Ollie.

Timon teaches Sam about what Hakuna Matata is. He tells the sloth that the motto is spending the whole day lying around doing nothing, which Sam is a natural at since he’s a sloth. Meanwhile, Pumbaa teaches Ollie scientific things about Hakuna Matata. He gives examples of the famous people from a long time ago and then gives the owl some homework.

Later that night, Timon and Pumbaa are stargazing with their students. While Timon tells Sam what the stars are, Pumbaa makes Ollie count the stars.

Timon and Pumbaa are now talking about their students, with Timon telling Pumbaa that Sam might be a genius while Pumbaa believes that he’s not training Ollie hard enough and decides to whip his student into shape. When he tries doing so, Owly repeatedly fails at doing his tasks. Meanwhile, Timon and Sam are napping on a tree branch during a tropical storm. The storm causes the branch to break and fall into the ravine.

The next day, Timon and Pumbaa give their students final exams. Ollie becomes fed up and decides to leave Hakuna Matata University. While he does so, he runs into Sam, who seems to feel the same way.

Timon and Pumbaa now have a graduation ceremony, unaware the their students are missing. They realize that when they are about to give them their diplomas, but this makes Pumbaa proud of Ollie for learning the true meaning of Hakuna Matata. Despite not making any money, Timon is proud of himself and Pumbaa for teaching students the important things they need to know to get through life. 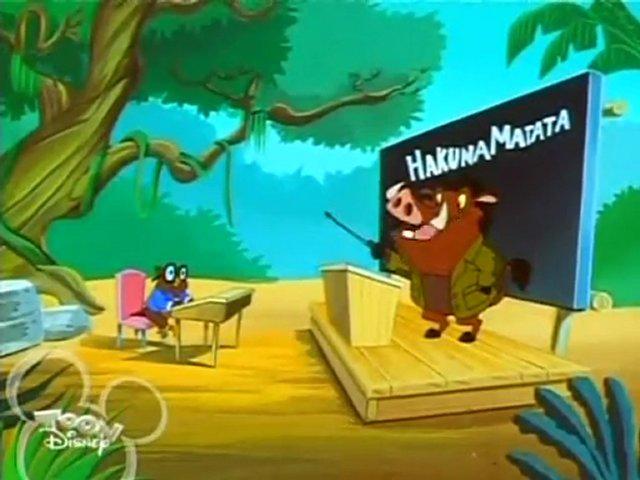