"Guru-Some" is the first segment of the thirty-first episode of Season 3 of The Lion King's Timon & Pumbaa. It aired on July 30, 1999, alongside "Jailhouse Shock".

"After hearing some of Pumbaa's 'wise' expressions, the jungle's animals start coming to him for advice."[1]

While Timon is taking a nap, Pumbaa searches for some bugs. While doing so, the warthog says "If bugs didn’t hide, I couldn’t find them." This catches the attention of a zebra, who believes Pumbaa might be wise. Timon disagrees, as he believes that he is the wise one.

Later, after Pumbaa catches a tiny bug, he says "Bigger isn’t always better, but it’s always bigger." The zebra from earlier brings in two other zebras to show them how wise Pumbaa could be with his sayings. After shooing the zebras away, Timon believes they might be mooks for thinking that what Pumbaa just said makes him wise.

The next morning, Timon and Pumbaa get surrounded by the jungle’s animals, who are all hear to learn from Pumbaa, as they believe in his wisdom. Pumbaa wakes up and says that morning is the first part of the rest of the day, much to the animals surprise and delight. Timon tries to explain to the animals that Pumbaa is not very wise, he is a mook, but the animals still believe the warthog is wise and begin to change their ways to follow Pumbaa's sayings.

Timon later talks to Pumbaa about his sayings, telling him what they are doing to the animals. When the animals show up, Timon notices a lizard writing a book about Pumbaa’s wisdom, which the reptile will make many copies of, much to Timon’s disbelief.

Despite Timon's prediction that the book won't sell a single copy, a large line forms to have Pumbaa write down his advice on their books on his wisdom. Timon runs away screaming. Later, when Pumbaa says that life is like a box of rocks, the animals begin to argue over what the warthog means. This leads to them to split up into two groups and have a war. Seeing the chaos Pumbaa’s sayings caused, Pumbaa decides to come up with something even wiser to say.

Pumbaa tells the animals that they can neither say “toy boat” three times fast, nor tickle themselves, making them realize that the warthog is not really wise, he is in fact a mook. Timon is proud of Pumbaa for trying to convince the animals that he is a mook just to keep them from fighting, which Pumbaa points out that it was a wise thing to do, making Timon think about it. 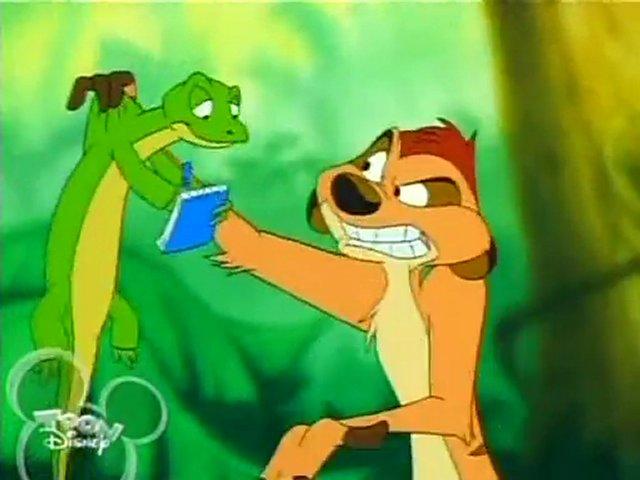