The Great Kings of the Past (also known as the Great Lions of the Past) are deceased rulers of the Pride Lands and the Tree of Life who look down on the living beings from the stars.

When a member of the Pride Lands monarchy dies, they are manifested as a spirit and are tasked with watching over their living descendants. Occasionally, a Great King of the Past will make himself visible to a descendant via clouds in the sky and will offer them advice, often when the descendant is in need of guidance. This applies to royalty, both in the Pride Lands and the Tree of Life, as well as past leaders of the Lion Guard.

The Great Kings are also responsible for choosing the next Royal Mjuzi.

When an evil member of the monarchy dies, they too are manifested as a spirit, but, unlike the Great Kings, they appear via fire rather than clouds. When an Evil Lion of the Past vanishes after making themselves present, they leave a distinguishing burn mark in the exact place where they appeared.

After Mufasa briefly plays with Simba after scolding him for his disobedience, Simba cheerfully tells Mufasa that they will always be together. However, Mufasa tells Simba about the Great Kings of the Past, who are former monarchs of the Pride Lands who look down on the living. Mufasa later tells his son that when he feels alone, the Great Kings will always be there to guide him, and so will he, one day.

The Great Kings of the Past are mentioned in the film again by Simba when he, Timon, and Pumbaa offer up their theories of stars. Timon mocks what Mufasa told Simba and indirectly calls Mufasa "a mook."

After the rhino chase, Kiara and Kovu stargaze later that night. Kiara sees a constellation of a baby rabbit while Kovu sees a constellation of two lions fighting each other. Kovu enjoys this pastime, and states he's never done this before. Kiara states the great Kings of the Past are up there, indicating Simba told Kiara of what Mufasa told Simba when he was young. Kovu responds by wondering if Scar is one of the Great Kings of the Past.

The Great Kings of the Past control a great power called the Roar of the Elders, which is bestowed on the second-born cub of the monarch, who is also tasked with leading the Lion Guard. The Great Kings control this power's use and can take it away if the user does not respect their gift, as is the case with Scar.

When Kion receives the gift, he uses it to free his best friend Bunga from the clutches of Cheezi and Chungu. The Great Kings can be seen roaring alongside him in the clouds.

At the end of the film, Kion uses the Roar once again to blast Janja and his clan out of the Pride Lands.

Kion frequently seeks advice from one of the Great Kings of the Past, his grandfather Mufasa. The Great Kings also appear in the clouds whenever Kion uses the Roar of the Elders.

Beginning in Season 2, Scar appears to his followers - Janja and his allies in the Outlands - via flames in a volcano. He frequently plots against the Lion Guard, seeking to destroy them so as to expose and take over the Pride Lands. He is later judged by the Great Lions of the Past, who send a cloud of rain to quench his flames.

The spirits of Askari, Mufasa, and Janna make a brief appearance at Kion and Rani's wedding in the series finale.

As Rafiki grants Nobi his wish of flying like a bird, swimming like a fish, and being as tall as a giraffe so that he can earn respect, the baboon speaks to the Great Kings and Warriors of the Past to make the mouse's wish come true.

In the stage musical productions of the original film, Mufasa sings "They Live in You" when Simba asks whether he and his father will always be together, causing Mufasa to look up to the night sky. He tells Simba about the Great Kings of the Past, and how they guide and watch over everything. Again, the Great Kings of the Past are mentioned when Simba, Timon, and Pumbaa look up at the stars, wondering what they are. Simba recalls Mufasa's words regarding the great kings of the past, but Timon and Pumbaa dismiss it and laugh at the notion.

While sitting under the stars with Rafiki, Mufasa admits that he likes to talk to the Great Kings of the Past.

Mohatu, the great-grandfather of Simba, becomes a Great King of the Past after his passing.

A Gift from the Heavens

After learning about the Great Kings of the Past from Mufasa, Simba mistakes a harmless rogue named "Great-Fighter" as a Great King of the Past.

Great Lions of the Past 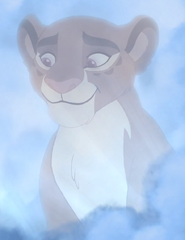 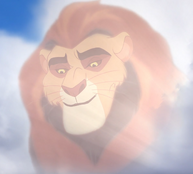 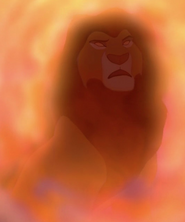 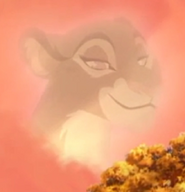 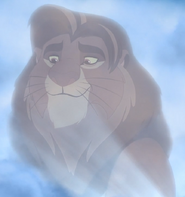 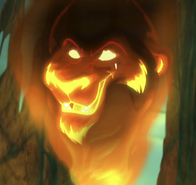 Scar
Add a photo to this gallery
Retrieved from "https://lionking.fandom.com/wiki/Great_Kings_of_the_Past?oldid=291825"
Community content is available under CC-BY-SA unless otherwise noted.