Fun for the Large is a comic inspired by The Lion King. It was published in April of 2003.

A full-grown Simba plays with Timon and Pumbaa, chasing them, and suddenly gets stuck in-between two rocks. While stuck, he falls asleep and dreams that he becomes a giant. Timon and Pumbaa wake him up, and, back in reality, Simba suggests that he is too big to play with them, but Timon replies that they just took a different route than usual. Simba eventually gets out of the tight spot and starts chasing and playing with them again. 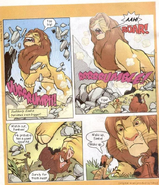 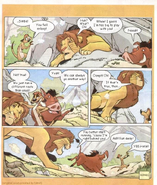 Add a photo to this gallery
Retrieved from "https://lionking.fandom.com/wiki/Fun_for_the_Large?oldid=218805"
Community content is available under CC-BY-SA unless otherwise noted.