"The Lion Guard worries that Fuli spends too much time on her own, so they start including her in their own family activities, which leads to repeated comic disaster."[1]

"Fuli's New Family" begins by introducing Kion, the prince of the Pride Lands, and his friends, Beshte, Bunga, Fuli, and Ono. At the start of the episode, the five friends are directing a herd of cape buffalo away from a mudslide when Bunga is flung on top of Ushari, an Egyptian cobra. Out of pure reflex, Ushari bites him, and the Lion Guard proceeds to panic over the venomous bite.

With Bunga on Beshte's back, the Lion Guard races to Rafiki, who proclaims that Bunga is immune to snake bites. Timon and Pumbaa are relieved and resolve to throw a feast in celebration of Bunga's immunity, but none of the other Lion Guard members can come, save Fuli, who has plans to hunt by herself. A horrified Timon and Pumbaa insist that she join them, but as they walk away, Beshte, Kion, and Ono wonder if they should involve Fuli more in their activities.

Once Fuli arrives at Hakuna Matata Falls, she is offered a platter of bugs, which she politely declines. Timon attempts to make conversation with her, but he soon becomes entranced by her soft fur, which draws the attention of Pumbaa. Bunga, however, attempts to climb into the mouth of a crocodile, since he has been proclaimed "immune," and Fuli saves him at the last minute.

After saving Bunga, Fuli attempts to go hunting by herself, but she is interrupted by Ono, who invites her to a meal with his flock. Though at first elated, Fuli discovers that Ono's flock merely eats bugs that are kicked up by elephants.

Shortly after escaping Ono, Fuli runs into Beshte, who convinces her to take a dip in the water with him. Despite her aversion to water, Fuli creeps to the edge of the pool, but just as she's about to dip her paws in, Beshte accidentally sends her flying into the water hole. A thoroughly annoyed Fuli returns to shore and says a hasty goodbye to Beshte.

Meanwhile, Bunga is bragging about his immunity to Kion, who remains unconvinced. While they're talking, Kion spots Fuli hunting by herself, and he calls out to her, inviting her to join his family on a hunt. Fuli accepts his offer, but when she arrives at the hunt, she's uninterested in hunting alongside Tiifu and Zuri, Kiara's air-headed friends. Despite this, she sidles up beside Kiara and sneaks up on a gazelle. However, at the last minute, Nala calls for a halt, and Kion explains that Kiara is simply learning how to track, not kill.

Across the Pride Lands, Bunga has ventured to a volcano, where he attempts to test his immunity by climbing to the very top. On his way up the volcano, he is spotted by Cheezi, who alerts Janja and his clan to the honey badger's presence.

Back in the Pride Lands, Fuli sings "My Own Way" out of frustration with her friends for not understanding her need to be alone. As she does this, Beshte, Kion, and Ono meet up and relate their experiences with trying to include Fuli in their family activities. After relating their stories to each other, they realize that Fuli may just want to be left alone, and they resolve to find her and promise to let her be herself from now on.

Meanwhile, Bunga has been cornered by Janja and his hyenas. Despite Janja's threats, Bunga cries that he's immune, a cry that Fuli happens to overhear. At the last second, she swoops in to save Bunga from Janja's clutches, but in the process, the two get trapped on a rock in the midst of a lava stream. Janja and his cronies attempt to take

advantage of their precarious position, but the rest of the Lion Guard shows up at the last second and helps Bunga and Fuli escape.

Once safely back in the Pride Lands, the Lion Guard resolves to cool off at the water hole, and Kion gently reminds Fuli that she doesn't have to come. Fuli thanks Kion for understanding, but reassures him that she still enjoys the company of her friends and that she thinks of them as her family. The five friends then join in a group hug. 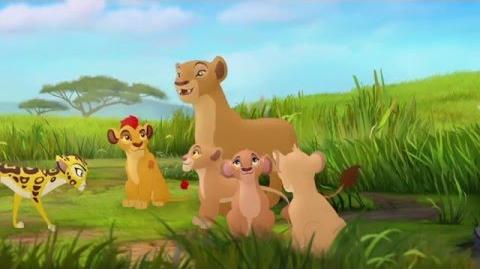 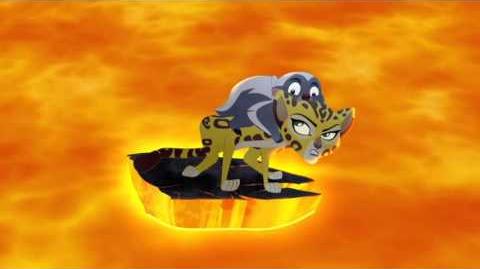