"Forbidden Pumbaa" is the first segment of the twelfth episode of Season 2 of The Lion King's Timon & Pumbaa. It aired on October 14, 1996 on the syndicated Disney Afternoon block, alongside "Washington Applesauce".

"Timon and Pumbaa are abducted by a UFO."[1]

In an alien spacecraft, the alien robot receives a message from a computer in its laboratory, which tells it to go to earth to abduct one warthog. The alien takes the spacecraft to the Serengeti at nighttime and finds Timon and Pumbaa sleeping. After the spacecraft tests Pumbaa, it puts the duo in a ball and flies off back to space with them.

While Timon and Pumbaa are inside the ball still sleeping, a leaf lands on Pumbaa's nose, making the two friends wake up in fear and run around the ball. Timon and Pumbaa then encounter the alien robot, which kidnaps Pumbaa and enters a type of door with the warthog. When Timon is unable to pass through the door to save his friend, he sees a small device that has a voice telling him to press the buttons 1, 2, and 3 to enter the door to chase after Pumbaa and rescue him. After pressing the buttons, Timon can now pass through the door. The meerkat then finds himself in a hallway and he finds Pumbaa and the alien robot. When he goes after them, a laser tries to shoot at him.

After Timon escapes the laser, he falls into a long cylindrical tube that sends him to the water, where he runs into a monster, who tries to eat him. Timon escapes the monster and goes to another hallway, where he finds Pumbaa and the alien robot again. The meerkat uses a jet-pack to chase after his friend, but the jet-pack uncontrollably flies around the hallway and hits one side of the spacecraft. As the pursuit goes on, Pumbaa and the alien robot make it to the laboratory and Timon gets locked out. He then finds a robot-zapping gun which will save Pumbaa's life.

When the alien robot puts Pumbaa in a machine, Timon enters the lab with the gun and forces the robot to free Pumbaa. But the robot pulls out an anti-robot-zapping gun and destroys Timon gun with it. After the robot activates the machine, Pumbaa comes out unharmed, much to Timon's happiness. However, two more Pumbaa's come out, revealing that the warthog got cloned. Since he is the "brains of the outfit," Timon suggests that he should get cloned instead.

Timon and Pumbaa start playing with the cloning machine to make more than one of each of them. The alien seems to be angered by what's going on. The robot is then revealed to be a machine controlled by a miniature alien robot. As there are too many Timon and Pumbaa clones, it decides to quit and as it leaves, it pushes a self-destruct button, which will cause the spacecraft to explode in 10 seconds. The Timon and Pumbaa clones quickly try to escape. When the real Timon and Pumbaa find each other, they use an escape pod to escape the aircraft, which explodes. As they are about to land on a nearby planet, Timon and Pumbaa wonder why the alien robot wanted a bunch of warthogs.

When Timon and Pumbaa land, they find themselves on a planet inhabited by multicolored female space warthogs, hinting that the reason the alien robot wanted to clone Pumbaa was to give each of them a mate. 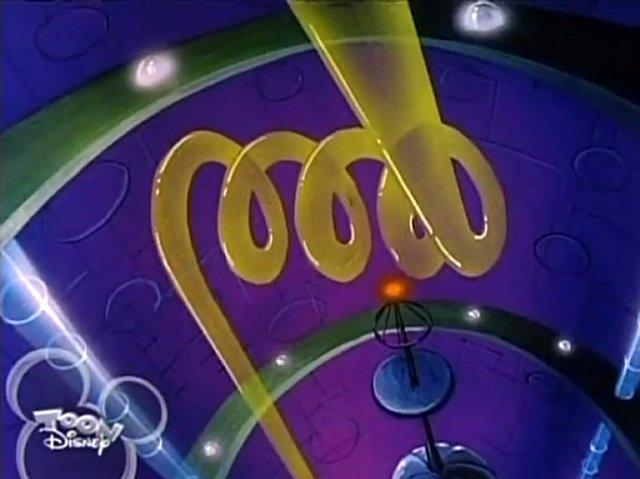