"Beshte rescues a young elephant that idolizes him after he wanders into danger."[1]

"Follow that Hippo!" begins by introducing Kion, the prince of the Pride Lands, and his friends, Beshte, Bunga, Fuli, and Ono. At the start of the episode, the five friends are alerted to a hyena attack and arrive on the scene, demanding to know where the hyenas are. At Kion's cry, a group of young animals emerges from the thicket, explaining that they had simply been playing "Lion Guard." Kion gently explains to them the dangers of pretending to be hyenas, and the young animals vow to never play in such a way again.

After the promise is made, a shy Mtoto approaches his idol, Beshte, and suggests that the real Lion Guard play with them. The other young animals are excited by this idea, but Kion admits that they have business elsewhere. However, Mtoto begs Beshte to stay, and the hippopotamus invites Mtoto to watch them train. On their way to the training grounds, Mtoto gushes about his love for Beshte and admits that it's because of Beshte that he likes the Lion Guard so much.

Once at the training grounds, Beshte tells the team that he's brought along Mtoto, and Kion agrees to let the young elephant train with them. First, the team does an obstacle course, but when it's Mtoto's turn to dash through the water, he gets water in his trunk and sprays it all over Fuli. After Mtoto's mistake, Kion decides to run a stealth-surround drill, in which the team attempts to sneak up on him without alerting him to their presence. However, as they're drilling, Mtoto accidentally falls down a steep cliff and lands on an unprepared Bunga.

After the disaster, Beshte volunteers to walk Mtoto home. However, unbeknownst to the team, Janja and his cronies, Cheezi and Chungu, have found their way back into the Pride Lands. On their way home, Beshte tries to encourage a crushed Mtoto by singing "Hero Inside" to him. The song works, and Mtoto returns to his friends, more ready than ever to play a game of "Lion Guard." No longer able to play as hyenas themselves, the friends begin to chase hyraxes instead, but in doing so, they inadvertently alert the hyenas to their presence, and Janja instructs his cronies to follow them.

Across the Pride Lands, Kion continues to train his team by pitting Bunga against Fuli in a race. After the race, Kion asks Ono to look for Beshte, who hasn't shown up for training yet. Instead, Beshte has been delayed by a group of Pridelanders, who are complaining to him about the hyenas. A patient Beshte promises to take care of the hyenas, blissfully unaware that Janja and his cronies are trailing Mtoto and his friends as he speaks.

Eventually, the hyenas catch up to Mtoto and his friends, and the young animals flee in panic. After a brief skirmish, the hyenas target Mtoto as the slowest. Meanwhile, Beshte continues to comfort the worried Pridelanders, but in the midst of their conversation, the young animals rush up to Beshte and beg him to save Mtoto. Beshte immediately races to the rescue, going underwater just as Ono swoops past.

Just in time, Beshte shows up to save Mtoto from the hyenas, and the two escape into the water. As the two flee the hyenas, the rest of the Lion Guard continues to search for Beshte, and they stumble across Mtoto's friends, who alert the team to the danger. Back at the river, Beshte and Mtoto manage to avoid the hyenas, who skulk on the edges of the river, trying to catch a bite of them as they pass. However, the two run into a float of crocodiles, and Beshte encourages Mtoto to be stealthy as they sneak past.

After the rescue, Mtoto relates his tale of rescue to his friends, who react with amazement and awe. Kion approaches and volunteers to give each of them a muddy mark of the Lion Guard, to which the young animals crowd around him eagerly. Mtoto, who bears his muddy mark proudly, proclaims to Beshte that he's his hero, and Beshte, in turn, proclaims that Mtoto is his. 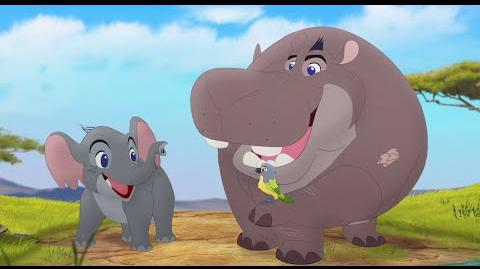 The Lion Guard Hero Inside Song Follow That Hippo! HD Clip
The "Hero Inside" musical sequence 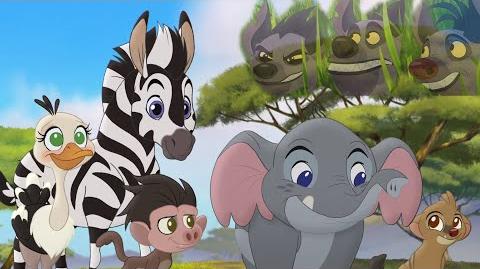 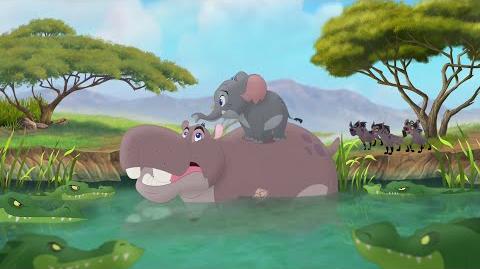 The Lion Guard Hyenas AND Crocodiles Vs Beshte & Mtoto! Follow That Hippo HD Clip
Crocodiles attack Beshte and Mtoto
Add a photo to this gallery

Retrieved from "https://lionking.fandom.com/wiki/Follow_that_Hippo!?oldid=286295"
Community content is available under CC-BY-SA unless otherwise noted.