"Fiji-Fi-Fo-Fum" is the second segment of the seventeenth episode of Season 2 of The Lion King's Timon & Pumbaa. It aired on November 4, 1996 on the syndicated Disney Afternoon block, alongside "Maine-Iacs".

Timon is looking for something in his suitcase for his and Pumbaa's Bestest Best Friend Day feast. When the meerkat finds nothing and he and Pumbaa cannot afford dinner for their feast, Pumbaa suggests that they sell their cow and Timon agrees, saying that he knew that having a cow around wouldn't be a bad idea.

After Timon sets up a table for the feast, Pumbaa shows up with a bag, which has a small cage with three magic bees inside. The warthog expects Timon to say, "Good job, Pumbaa," but the meerkat is not happy about his work, believing that he made their feast disappear, and says that he did not do a good job.

Come nighttime. While Timon and Pumbaa are sleeping, the bugs create a beanstalk which sends the two to the clouds. Timon wakes up to brush his teeth and then is disturbed by a bird. The meerkat then realizes that he's in mid-air and falls but lands on a plane and later a space shuttle. Timon then lands on cloud next to Pumbaa and the beanstalk. Pumbaa tells Timon what the bugs have done and expects Timon to say what the warthog wanted him to say earlier, but Timon believes that this is just a dream. Timon and Pumbaa see a giant grasshopper, which Pumbaa considers to be a good meal for their feast. Timon and Pumbaa chase the bug to its mansion, but the stairs are too high for them to get on. The two try various ways to get on the stairs and finally make it to the door.

Timon and Pumbaa quickly run back to the beanstalk to slide down. When the two land, Pumbaa sees the grasshopper going down as well. So the warthog hits the beanstalk to break it, but it causes the grasshopper to fall and land on Timon. Timon then wakes up from what he believes was just a dream. The meerkat then sees that Pumbaa set up their Bestest Best Friend Day feast, with the giant grasshopper as their meal, which indicates that everything that happened up in the clouds was real after all. Timon is now proud of his friend for the work he's done and he finally says, "Good job, Pumbaa." 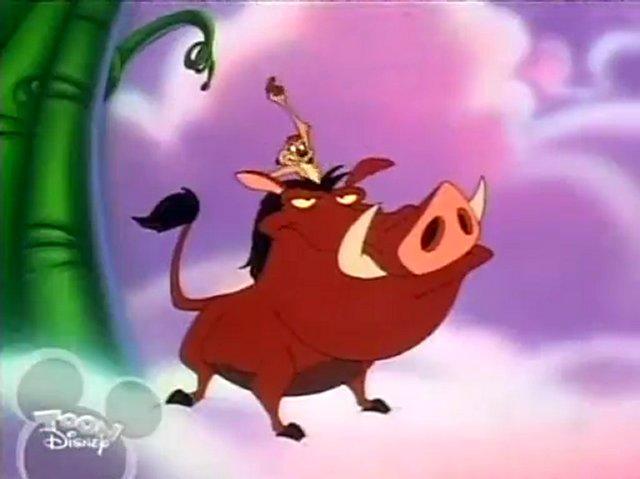