Festival of The Lion King is a live stage show inspired by The Lion King. It is located in Disney's Animal Kingdom at Walt Disney World and in Hong Kong Disneyland, and stars Simba, Timon, and Pumbaa. The show uses songs, dance, puppetry, and visual effects to portray a tribal celebration in an African savanna setting filled with lions, elephants, giraffes, zebras, gazelles, and various birds.

It is a traveling celebration presented by Simba and his friends (including a band of four human singers). The show is in the form of a revue, not a condensed version of either the film or the stage musical. The show features Elton John and Tim Rice's award-winning music from the film. The show differs slightly between the Animal Kingdom and Hong Kong versions, but the overall concept is the same.

The show is presented inside an enclosed theater in the Africa area. Guests sit in four sections, each designated with an animal name: Warthog, Elephant, Giraffe, and Lion. Guests are asked to make a noise that corresponds to their animal at certain times during the show, and children are sometimes pulled out of the audience to dance. The show is hosted by four performers dressed in costumes inspired by traditional African dress. Each has a Swahili name: Kiume (meaning "masculine and strong"), Nakawa (meaning "good-looking"), Kibibi (meaning "princess"), and Zawadi (meaning "the gift").

The story of the film is not followed. Instead, it is replaced with a show of songs from the film and other sources. This is combined with aerobatics performed by the Tumble Monkeys, a group of performers dressed in orange monkey costumes. The cast also performs annually for the Walt Disney World Christmas Day Parade, which is filmed at the Magic Kingdom and is broadcast on Christmas Day on ABC.

The show is featured in the "Theater in the Wild" in Adventureland. Similar to the theater setting in Disney's Animal Kingdom, guests sit in four different sections, each with an animal name: Warthog, Elephant, Giraffe, and Lion. The show in Hong Kong has been arranged to be a simplified version of the story of The Lion King, including the songs from the film.

The performance is mainly in English, but two actors dressed as monkeys summarize and translate Rafiki's lines into Cantonese in order to accommodate guests who do not speak English. Simplified Chinese subtitles for Mainland Chinese visitors are also projected onto the screens above each seating section. The show is presented to Simba by Rafiki (portrayed by a female actress, as in the stage musical) as a re-telling of Simba's life. Simba is represented by a large, elaborate puppet on a parade-style float decorated as a tribal-styled Pride Rock. 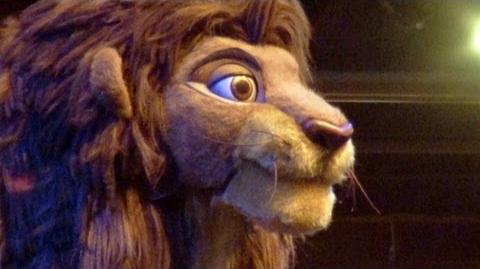 Retrieved from "https://lionking.fandom.com/wiki/Festival_of_The_Lion_King?oldid=249069"
Community content is available under CC-BY-SA unless otherwise noted.