"Escape From Newark" is the first segment of the seventh episode of Season 3 of The Lion King's Timon & Pumbaa. It aired on February 12, 1999, alongside "Truth Be Told".

"After being captured, Timon and Pumbaa try to escape from a 5 star pet shop."[1]

After Pumbaa catches and eats a bug Timon was after, he comments on how good and easy their life is, but Timon tells the warthog that they work for a living and wants to live a pampered life. After Timon "wishes" for an easy life, he sees a bug standing on a target and runs to it. Pumbaa warns Timon that it's a trap and they get trapped in a crate, which gets put in a boat.

Timon and Pumbaa get sent to a 5 stars pet shop owned by Pet Store Owner Quint. While Pumbaa dislikes the idea of him and Timon being in a pet shop, Timon also dislikes it at first, but changes his mind when they get pampered by Quint's machines. When Timon and Pumbaa are put in a "golden cage," Timon is delighted by what it has: an air conditioner, a private bathroom, and bugs. Pumbaa, however, is homesick and doesn't want to stay in the pet shop. Meanwhile, Quint goes to lunch, leaving the pet shop secured with laser beams.

Timon is enjoying his new pampered life at the pet store, calling it a new home. But Pumbaa suggests that since Quint refuses to let them go, they should escape. Timon, however, refuses to listen to Pumbaa's advice and decides to stay in the cage.

Later, Pumbaa opens the vent with a fork to make an escape while Timon is getting pampered. The meerkat tells his friend that he should give their cage a chance and try to relax, but Pumbaa decides to continue making an escape and he says that he will do either with or without Timon. Timon turns around and is given some bugs. When he is about to show Pumbaa the grubs, he sees that the warthog presumably escape. Believing that he gave up his best friend for his new life at the pet store, he feels miserable and guilty. However, it is revealed that Pumbaa was actually in the bathroom.

Pumbaa tells Timon that there is still room for one more to escape, making Timon happy to see his friend again. Pumbaa tells him that he's the only one who can come up with a clever way to escape and that he's the one who can easily fit through the vent. Timon eventually agrees with Pumbaa's idea of escaping the pet shop and going back to their home.

Pumbaa ties Timon to a rope and the meerkat goes through the vent and in the hall while Pumbaa holds on to the rope. The meerkat pushes a button that opens all the cages and he frees all the other animals in the store. While Timon and Pumbaa attempt to escape, Timon eats some bugs, but then he accidentally drops one of the insects out of his mouth, which touches the ground, causing the alarm to go on. 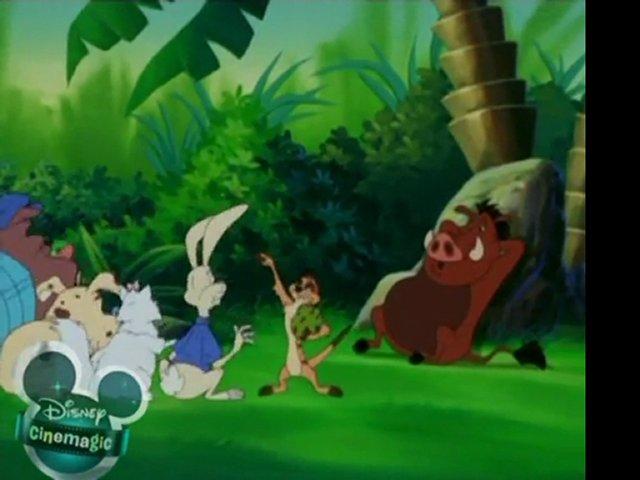