"Early Bird Watchers" is the second segment of the thirty-second episode of Season 3 of The Lion King's Timon & Pumbaa. It aired on August 6, 1999, alongside "Nearly Departed".

"Timon is determined to beat the early birds to his worms."[1]

Timon is about to catch a worm, but then the early bird catches the insect before him. The meerkat becomes annoyed about the bird repeatedly beating him and decides to set an alarm clock so that he can wake up before the early bird. Pumbaa tells his friend that no matter what he tries, the early bird always gets the worm.

The next morning, the alarm clock rings, waking Timon up. However, the meerkat gets so disturbed by the noise that he misses a worm as the early bird takes it. Later that night, Timon hires a rooster to wake him up before the early bird. But when morning arises, the rooster is still asleep and Timon sees the early bird catch another worm, beating him again. Annoyed, Timon fires the rooster.

Timon decides to make a phone call to ask the person to wake him up before the early bird. During the night, while Timon and Pumbaa are sleeping, Timon gets calls from various people. Later in the early morning, the phone rings and Pumbaa answers it. The call is for Timon to let the meerkat know that it is time for him to wake up, but since Timon is still sleeping, Pumbaa decides to take a message. When Timon wakes up, he sees that the early bird beat him again. The meerkat then decides to try various ways to defeat the bird.

On the first attempt, Timon uses some instruments to try to make the early bird wake up after them. The plan fails as it results in the bird catching a worm. For the second attempt, Timon makes Pumbaa disguise himself as a worm. This idea also ends in failure as Pumbaa gets caught by a vulture instead of the early bird.

For the third attempt, Timon paints a worm’s face on a bomb, believing that the early bird will not be able to tell the difference. He makes Pumbaa hold the worm-bomb with his mouth while he goes to the worm’s hole. But when they get there, Pumbaa accidentally eats the bomb, which explodes inside of him.

When morning arises, Timon is about to catch the worm, but stops for a minute to look for the early bird. When he sees that the bird is nowhere in sight, the meerkat finally catches the worm. While Timon rejoices over beating the early bird, the bird is shown relaxing with Pumbaa, trying to live a Hakuna Matata lifestyle. He tells the warthog that he has been trying to get out of his early bird business and that it was hard for him to find a replacement. 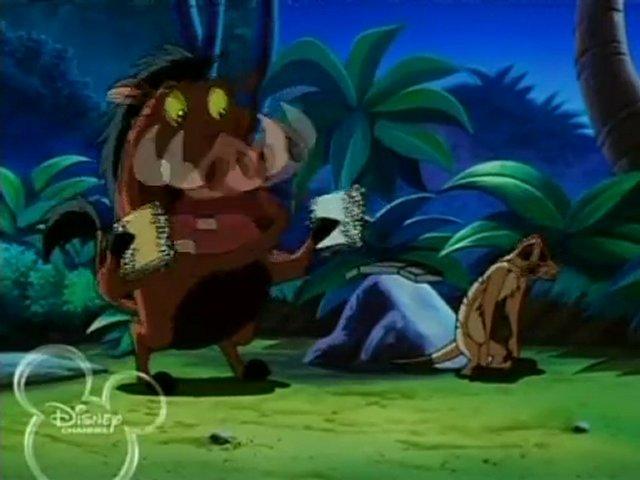