Eagles are creatures that appear in The Lion King universe.

In The Lion King's Timon & Pumbaa

There are two notable eagles in the series: a mother and her son named Baby Earl, who both make their first and only appearance in "To Kilimanjaro Bird". After Timon steals Baby Earl's bowl of grubs, Mother Eagle gets angry at him and she makes him and Pumbaa babysit her son while she goes to the lowlands to find more bugs.

An eagle makes a brief appearance above the gorge when Timon shows Pumbaa where his backstory begins and where he lived in a meerkat colony.

In The Hakuna Matata Magazine Series

In The Elephants' Graveyard

An eagle named Claws appears in this book and serves as the secondary antagonist. After failing to catch Timon due to the efforts of Simba, Claws swears revenge on the cub and allies with Harak to get his own back on the young lion. In the end, their plot fails and Claws is scared away by a pile of falling bones. He is never again seen or mentioned.

In All Mud and Motor Mouth

An eagle attacks Timon's colony, and Timon is blamed for the ordeal.

In The Lion Guard

An eagle soaring above Wildebeest Valley 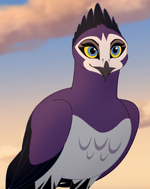 Anga
Add a photo to this gallery

Retrieved from "https://lionking.fandom.com/wiki/Eagles?oldid=216617"
Community content is available under CC-BY-SA unless otherwise noted.