Don Hahn is a film director and producer who has worked on several notable animated classics, such as Beauty and the Beast and The Lion King.

Born in Illinois, Hahn, the son of a Lutheran minister,[1] developed an interest in animation and especially music at an early age.[2] His family moved to Burbank in southern California,[1] where he went to school and shot his first animated shorts in the high school film club. During high school, Hahn performed as a member of the Los Angeles Junior Philharmonic and later went on to study music and art at Cal State Northridge. He graduated from North Hollywood High School, where he was drum major of the marching band. He went on to study music at Los Angeles Valley College, where he was also drum major of the marching band.

Hahn continued to entertain the notion of becoming a professional orchestral percussionist for a time before finally joining Walt Disney Productions in 1976. He began his career in animation on Pete's Dragon, which was released in 1977. Six years later, he would work alongside famed animator and director, Wolfgang Reitherman, as assistant director of The Fox and the Hound. He served a similar role during production of the Oscar-nominated 1983 animated featurette, Mickey's Christmas Carol.

Hahn began to expand his career by serving as production manager of The Black Cauldron and The Great Mouse Detective in the mid-1980s. He then moved on as an associate producer of Disney/Amblin's Who Framed Roger Rabbit. The following year, he served as producer alongside Steven Spielberg, Kathleen Kennedy, and Frank Marshall for the Roger Rabbit cartoon, Tummy Trouble, directed by Rob Minkoff.

Later, Hahn signed on as producer for the feature film, Beauty and the Beast. In this film, he was responsible for guiding a team of six-hundred artists and helping to create the first film to garner the film (and himself) an Academy Award nomination for Best Picture nomination. In October of 1991, when initial director Roger Allers signed on to direct King of the Jungle (which would later become The Lion King), Hahn signed on as well with Beauty and the Beast directors Gary Trousdale, Kirk Wise, and Rob Minkoff in April 1992. Despite this, the Disney Feature Animation staff and studio head Jeffrey Katzenberg felt that The Lion King was a less important project than Pocahontas. Contrary to his belief, the film went on to receive raving reviews and gross $783 million worldwide.

Hahn would collaborate again with directors Trousdale and Wise on The Hunchback of Notre Dame and Atlantis: The Lost Empire. He also collaborated with Irene Mecchi on Hunchback and Fantasia 2000, Allers on Kingdom of the Sun (which later became The Emperor's New Groove), and The Little Matchgirl. In 2003, Hahn teamed up with Lion King co-director Rob Minkoff to produce The Haunted Mansion, starring Eddie Murphy.

Recently, he directed his first feature film, Waking Sleeping Beauty, and is slated to serve as executive producer on the upcoming Disneynature documentaries.[3] 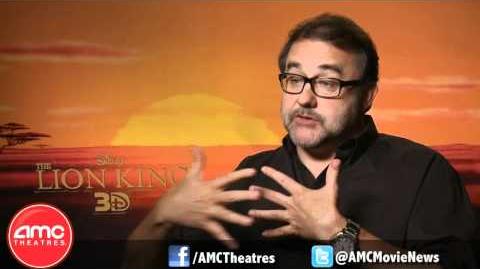 Retrieved from "https://lionking.fandom.com/wiki/Don_Hahn?oldid=252876"
Community content is available under CC-BY-SA unless otherwise noted.