"Congo on Like This" is the second segment of the twenty-second episode of Season 1 of The Lion King's Timon & Pumbaa. It is the eleventh episode of Season 1 to air on the CBS Saturday morning lineup. It aired on December 9, 1995, along with "Let's Serengeti Out of Here".

"A tarsier announces there's a vicious predator loose in the jungle - Simba!"[1]

As Timon is taking a nap, Simba suddenly scares the meerkat with a big roar, causing himself and Pumbaa to laugh. After that, Timon and Pumbaa find a carcass lying on the ground. A tarsier comes out of the bushes to warn the two that there's a predator on the loose. After Timon and Pumbaa show him that they have Simba on their side, the tarsier tells the two that Simba was probably the one who ate the animal and he might eat them in their sleep. Timon and Pumbaa don't believe him.

Later that night, while Pumbaa and Simba are asleep, Timon shakes in fear as he hears Simba saying "meat." The next morning, Timon tells Pumbaa that the tarsier was right about Simba, but Pumbaa tells Timon that he's just being paranoid and that Simba only eats bugs. After Simba wakes up, Timon tells the lion that there are free pancakes down by the watering hole to distract him. When Simba leaves, Timon goes through his personal belongings to find evidence that Simba might be the predator. When Simba comes back, Timon and Pumbaa quickly put his stuff back in his drawer, and the lion has a feeling that Timon was just trying to get rid of him so that he can go through his stuff and Timon replies by saying that he should trust him and Pumbaa.

The second test is to see if Simba chooses meat over any other food. Timon inflates a meat and a watermelon. The inflated meat gets popped by a tree branch and lands in Simba's mouth, making Timon and Pumbaa believe that Simba chooses meat.

The third test is to see if Simba thinks about meat all the time. Timon shows Simba pictures of different kinds of meat. Simba then becomes suspicious and wants to know what Timon and Pumbaa are up to, and the two nervously say they're not up to anything.

For the final test, Timon and Pumbaa use a Crave-O-Meter to find out if Simba is a predator. The machine says predator and runs away. Then, the tarsier tells Timon and Pumbaa that they should hide in a safe place in order to avoid Simba and Timon agrees.

The "safe place" the tarsier guides Timon and Pumbaa to turns out to be a cave filled with other carcasses. The tarsier then reveals himself to be a jackal in disguise and he chases Timon and Pumbaa to a dead end of the cave, telling them that he has been trying to get them away from Simba for months. This implies that everything he told them about Simba was to trick them into thinking that their lion friend is the predator who ate the dead animal from earlier and that they are his next victims. As Timon and Pumbaa are cornered, Timon blames Pumbaa for being willing to take Simba in in the first place.

Fortunately, when the jackal is about to eat Timon and Pumbaa, Simba finds and rescues his friends just in time and defeats the tarsier/jackal by putting him in his mouth and spit him out, throwing him far away. Timon, Pumbaa, and Simba happily get out of the cave and Simba realizes that Timon actually thought that he was going to eat him and Pumbaa. Timon denies it and Simba says "You wouldn't be lying to a lion now", which makes himself and Pumbaa laugh, and Timon says "Carnivores, oy." 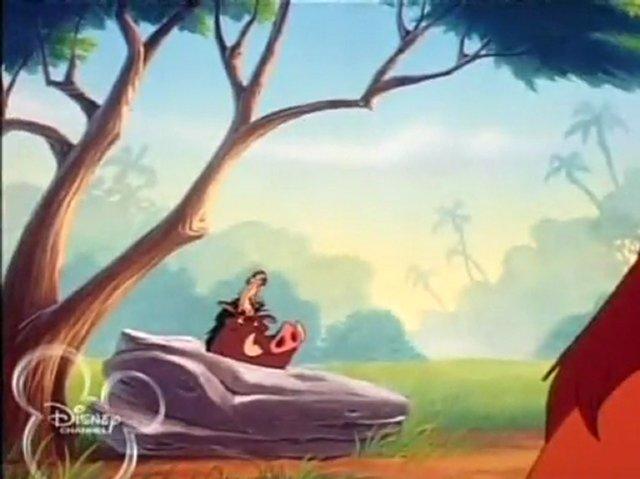 Retrieved from "https://lionking.fandom.com/wiki/Congo_on_Like_This?oldid=306413"
Community content is available under CC-BY-SA unless otherwise noted.