"Cliphangers" is the second segment of the thirty-ninth episode of Season 3 of The Lion King's Timon & Pumbaa, which is also the 85th and final episode of the series. It aired on September 24, 1999, alongside "Mook Island".

"The boys think about their lives when they fall off the cliffs."[1]

Timon and Pumbaa are on the Cliffs of Moher looking at the bottom. Timon then sees a worm and tries to catch it, but fails when the worm gets into a hole. When the meerkat tries to get the worm out of the hole, he accidentally breaks half of the cliff with a drill, leading to himself and Pumbaa falling down.

As the two start falling, they're lives flash before his eyes, with Timon's being a montage of him going through rough times, while Pumbaa's is a montage of him going through good times, which Timon finds to be unfair. Pumbaa explains that the reason why his flashbacks are good is because he lived his life according to the principles of Hakuna Matata and that Timon lived his life like a complete mess.

Hearing Pumbaa's words, Timon blames the warthog not only for wanting to visit the Cliffs of Moher, but for wanting to go across the globe in various settings which got them into trouble, leading to a flashback montage of the duo visiting different places around the world and getting kicked out. Pumbaa replies by saying that it is technically Timon's fault that they're falling down, telling him that he always comes up with bad ideas, which leads to a flashback montage of Timon coming up with ideas that all went wrong. Timon replies by saying that they were great ideas and reminds Pumbaa about his naysaying. Pumbaa reminds Timon about the times the meerkat called him (or someone else) a mook.

Timon and Pumbaa realize that they're getting close to landing. Knowing that they are about to meet their doom, Timon tries to remember all the good times, such as all the things they used to pull out from behind their backs. This gives Pumbaa an idea, thinking that there must be something "behind their backs" that they can use to save themselves. The two friends pull out various objects, looking for something that would rescue them. When the two can't find anything, they give up and reluctantly decide to go for their deaths. But then, it starts raining and Pumbaa pulls out an umbrella and opens it, making the two land safely.

Pumbaa shows Timon that he caught the worm from earlier. Timon and Pumbaa are about to split the worm in half so they can both eat it, but then some of the objects hit the two, making them lie on the ground, and the other objects land on them. After the objects fall and land on Timon and Pumbaa, the worm is free to escape the two. Timon is then heard saying "oy!", implying that he and Pumbaa survive. 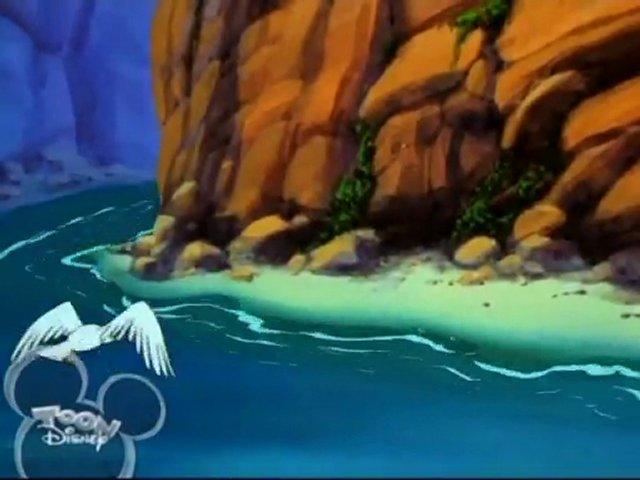