"Circus Jerks" is the first segment of the ninth episode of Season 3 of The Lion King's Timon & Pumbaa. It aired on February 26, 1999, alongside "Nest Best Thing".

"Timon and Pumbaa join a circus, but this makes a clown jealous."[1]

Timon and Pumbaa see a circus, which Pumbaa wants to join in order to make people laugh by becoming a clown. Timon states that being a clown is a job and therefore, it contrasts with their Hakuna Matata lifestyle. The meerkat then changes his mind when Pumbaa points out that becoming a clown would make them become world's famous.

Timon and Pumbaa, wearing clown makeup and costumes, are now joining the circus. Quint appears with a clown named Meanie, stating that their previous performances were not so successful, so he hired Timon and Pumbaa to follow Meanie's lead.

The circus show begins. Meanie performs by doing many cruel tricks to Timon and Pumbaa. Despite all those cruel tricks, Pumbaa keeps wondering how the clown got his name. At the end of the show, the audience seems to love Timon and Pumbaa more, much to Meanie's dismay. So the clown decides to quit his job.

Timon and Pumbaa are in their cabin talking about all the fame and fortunes they could receive in their future performances. Timon then states that Meanie will not be there to "bother them", stating that he blames the duo for "stealing all his fans." When Timon hears the audience cheering for him and Pumbaa and gets ready for their show, Pumbaa is concerned about Meanie quitting his job and tells Timon that they can't do the show without him. Regardless, Timon does it anyway.

Timon is on stage trying to make the audience laugh, but fails as everyone silent. Meanwhile, Pumbaa goes to Meanie's house and sees him crying while stating how his mother, who had passed away from blowing herself up in her circus performance, had spent her whole life sacrificing for him and gave him all her clown costumes for him to follow her footsteps and now he is unwanted. The warthog then tells the clown that the audience do want him, making him surprised as it is the first time anyone ever said that.

Meanwhile, the audience throws food at Timon, who regrets not listening to Pumbaa. But then, Meanie returns and he and the duo continue the performance. Meanie then puts Timon and Pumbaa in a cannon and launches them out of the circus, while Pumbaa finally concludes how Meanie meanie got his name. 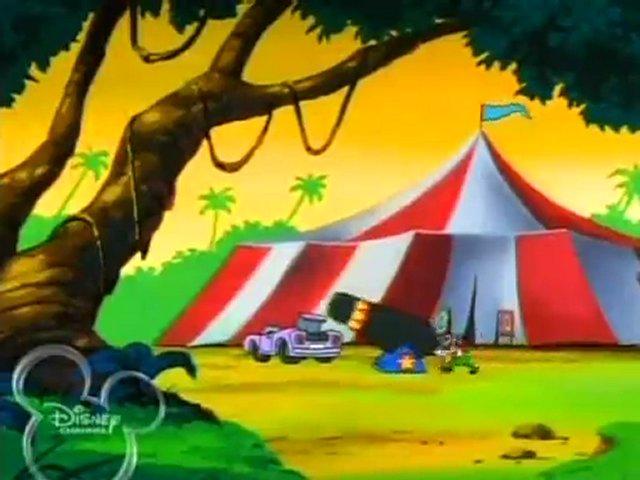