"Circle of Life" is a song composed by Elton John for The Lion King. It was released on May 31, 1994, as part of the film's soundtrack. It is the opening song of the film. It plays during the prologue as animals gather around Pride Rock to see the presentation of Simba, the son of Mufasa and Sarabi, who is to succeed his father as the king of the Pride Lands. A reprise of the song is heard at the end of the film as animals gather around Pride Rock once more to see the presentation of Simba and Nala's newborn cub.

The song takes place at the very beginning of the film. As the song progresses, various animal herds travel through the Pride Lands to gather at Pride Rock. There, Rafiki meets up with the current king of the Pride Lands, Mufasa, and his mate, Sarabi. After blessing Mufasa's newborn cub, Simba, Rafiki lifts the cub up high for all the animals to see, and the animals bow before their future king.

There is a reprise of the song at the end of the film, after Simba has taken the throne, in which Rafiki presents Simba and Nala's newborn cub to the animals of the Pride Lands.

In the film's musical adaption, the opening sequence is altered noticeably in certain ways; for example, the song is sung by Rafiki, who is accompanied by a chorus of multiple background singers garbed in unusual, distinctive costumes or manipulating animal puppets.

As the sun rises over the Pride Lands, Rafiki commences the start of the production by kicking off the song and summoning the various animals of the surrounding area for Simba's presentation. As the first two verses of the musical number end, a representation of Pride Rock appears onstage, carrying its two reigning rulers: King Mufasa and Queen Sarabi, who is cradling the small puppet that represents Simba. As the choir chants excitedly in the background, Rafiki joins the monarchs atop Pride Rock to bless the prince before raising him high into the air, singing joyfully alongside the bowing chorus.

At the end of Act II, Simba's friends and family acknowledge him as the rightful king of the Pride Lands. Rafiki crowns Simba with the mantle of kingship after his victory, and Simba ascends Pride Rock. He then gives a mighty roar across the whole kingdom, and the animals come back to the Pride Lands to recognize Simba as the rightful king. The lionesses appear to celebrate with the other animals as Rafiki holds up Simba and Nala's newborn cub. A blackout finishes Act II and leads to the curtain call at the end. 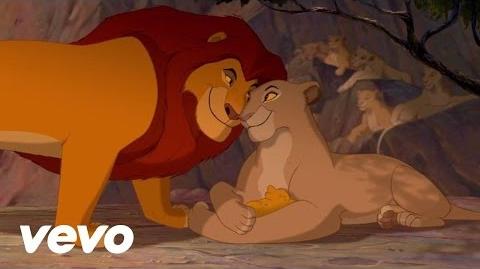