Cheetah is a male cheetah.

During Mohatu's reign, the Pride Lands suffer from a horrible drought. After finding a new water source, Mohatu shares its location with his subjects. But blinded by greed and thirst, the Pride Landers rush across the desert in a race to reach the water first. As the race becomes gruesome, Cheetah zips ahead of the other animals.

But when his stamina is unable to sustain him any longer, Zebra cuts ahead of him and kicks him in the chest. Cheetah stumbles and the other animals run him over in their haste to reach the Great River. Later, after the animals have reached the Great River, Mohatu arrives carrying Cheetah on his back. After getting Crocodile to save Zebra from quicksand, Mohatu reminds Zebra that he owes Cheetah an apology. Zebra apologizes to Cheetah and Cheetah accepts his apology. The two animals drink from the river, then Cheetah climbs onto Zebra's back for the ride home.

Though Cheetah's personality isn't explored, he appears to be somewhat friendly, shy, and meek. 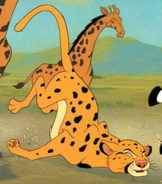 Cheetah is kicked in the chest by Zebra

Mohatu carries Cheetah on his back
Add a photo to this gallery
Retrieved from "https://lionking.fandom.com/wiki/Cheetah_(character)?oldid=289273"
Community content is available under CC-BY-SA unless otherwise noted.