Cek and Rama's flock is a group of mountain goats. They live at the Tree of Life.

The flock appears during the "Who Is Better Than Who" musical sequence.

Cek, Rama, and their flock are climbing up and down a cliff face when Beshte approaches and accidentally rains rocks down on him. Cek and Rama barely jump to safety in time and wonder why Beshte had thrown rocks at them.

The animals who were victims of Beshte's mistakes, including Cek and Rama, run into one another and resolve to report the incidents to the Night Pride. The animals report on Beshte to Baliyo, describing him as a monster as tall as the Tree of Life who is on a path of destruction.

When the Lion Guard brings the animals to the Tree of Life to reconcile with Beshte, Pinguino clears Beshte's name. Cek and Rama then join in on a celebratory chant for Beshte.

The flock gathers around the Tree of Life as Janna lies dying. They react with sadness when Makini announces her death. Later, they attend Rani's coronation. 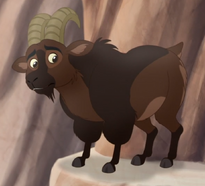 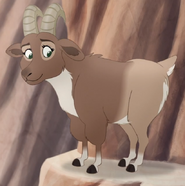 Rama
Add a photo to this gallery
Retrieved from "https://lionking.fandom.com/wiki/Cek_and_Rama%27s_flock?oldid=295673"
Community content is available under CC-BY-SA unless otherwise noted.