"Cave of Secrets" is the twenty-first episode of Season 2 of The Lion Guard. It aired on September 4, 2018.

"The Lion Guard finds a mysterious cave that could contain what they need to defeat Scar, but they must traverse through dangerous hazard to learn its secrets."[1]

The Lion Guard examines paintings in the Lair of the Lion Guard in the hopes of finding a way to defeat Scar. During their search, Makini informs the team that the Lair includes many paintings, some of which the Guard has never seen ("Wisdom on the Walls").

Just then, Kion notices a boulder blocking a painting and instructs Beshte to move it. With the boulder out of the way, the Lion Guard finds a secret passage leading deep into the heart of the Lair. Makini uses her Bakora Staff to bring a painting to life, which details how the original Lion Guard, led by Askari, had defeated a great evil by venturing deep into the Lair's chambers. Determined to find a means of defeating Scar, Kion leads the Guard into the caverns, while Makini stays behind for her own safety.

As the Lion Guard ventures deeper into the Lair, they reach a weak section of floor, where the ground collapses beneath them. The team starts to tumble toward some sharp rocks until Beshte plants himself in the way and prevents the others from falling onto them. The Guard then sets off in a new direction, though they continually meet dead-ends.

Meanwhile, Makini continues to examine the Lair's paintings, despite the danger.

Back underground, Ono uses his sharp eyesight to figure out that the caverns form a maze. He guides the Lion Guard through the tunnels until they escape the maze.

Elsewhere, Makini is examining the Lair's paintings when she stumbles upon the collapsed ground where the Lion Guard had fallen through. Worried for their safety, she jumps into the pit after them.

As the Lion Guard reaches safety, they comment on their luck in having both Beshte and Ono there to save them from harm. This leads Kion to realize that the underground chamber is a test, in which a Lion Guard must prove its worth. Just then, Makini arrives, having followed the Guard's pawprints, and Kion reluctantly allows her to join the quest.

The team ventures on until they reach a canyon. Makini uses her Bakora Staff to awaken a nearby painting, which shows the bravest of Askari's Lion Guard walking in midair across the divide. Bunga recklessly jumps across the canyon, but miraculously lands in midair. The Guard then realizes that it is an optical illusion, in which a stone bridge appears to blend in with the rest of the landscape. The team then crosses over safely.

In the next chamber, a large boulder comes loose and starts rolling toward the Guard. Fuli gets an idea and jumps on top of the boulder, digging her claws in to slow it down. When that idea doesn't work, she uses her speed to guide the boulder around her friends and out of harm's way.

The Lion Guard enters the next chamber, only for a rock fall to lock them in complete darkness. Kion roars softly to get a feel for his surroundings, and guides the team out of the dark by following the sounds of echos.

Under Kion's leadership, the team reaches another chamber, where Makini leads them to a painting. She explains that a group of evil lions had attempted to overtake the Pride Lands, but Askari and his Lion Guard had foiled their plans using an unstoppable force. She then leads them into a chamber where there is a pool of water and yet another painting.

At first, the team cannot decipher where the unstoppable force is, but then Kion realizes that it is their reflection - or the Lion Guard itself - that is the unstoppable force. Makini brings the painting to life, showing how Askari's Guard had worked together to defeat the evil lions.

Makini apologizes for not having explained this earlier, but Kion reminds her that the journey had taught the Lion Guard their value. As one, the Guard looks up at the painting, which shifts into the symbol of the Guard, and cries out their catchphrase, determined to take down Scar. 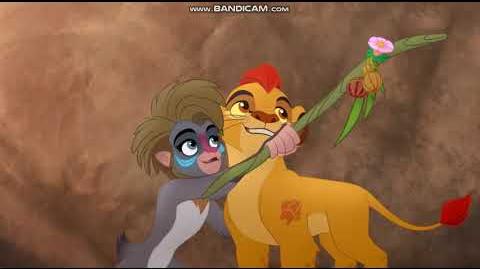 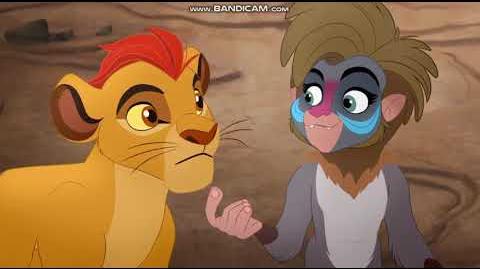 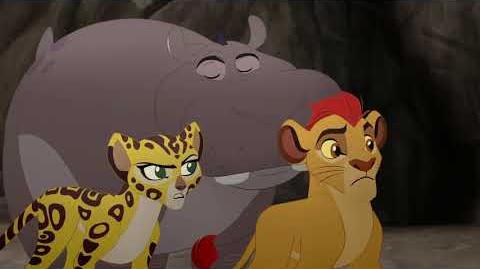 The Invisible bridge (The Lion Guard)
The test of bravery