Carla Hall is a chef, former model, and television personality. She voices Mpishi in The Lion Guard.

Hall was born and raised in Nashville, Tennessee. In 1986, she received a degree in accounting from Howard University's Business School. She then worked for two years at Price Waterhouse, where she obtained a CPA license.

Hall began a career in modeling in 1988, working runways in London, Milan, and Paris. While in Paris, Hall became interested in food.

Hall eventually moved back to the United States, settling in Washington D.C., where she launched a lunch delivery service called the Lunch Bunch. After four years of working there, Hall graduated with a Culinary Career Training certificate from L'Academie de Cuisine in Gaithersburg, Maryland. Hall moved on to serve as a sous chef at the Henley Park Hotel, after which she worked as the executive chef at the State Plaza, a sister hotel, and the Washington Club, a private social club.

Hall moved on to catering in 2001, when she founded her own catering company, called Alchemy Caterers, based in Silver Spring, Maryland. The business has since been renamed Alchemy by Carla Hall.

In The Lion Guard, Hall voiced Mpishi the harrier hawk, for whom she provided speaking and singing parts.[1] 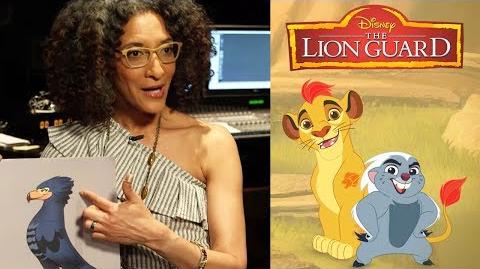 Celebrity Chef Carla Hall Gets Animated On Disney's "The Lion Guard" Disney Family
Carla Hall on her character, Mpishi
Add a photo to this gallery

Retrieved from "https://lionking.fandom.com/wiki/Carla_Hall?oldid=286150"
Community content is available under CC-BY-SA unless otherwise noted.