This version of "Can You Feel the Love Tonight" is one of the fifteen drafts Tim Rice and Elton John had composed as the romantic ballad between Simba and Nala. Prior to this version, a duet version between Simba and Nala had been scrapped causing Rice to experiment with writing "a parody version" between Timon and Pumbaa lamenting the loss of their love-stricken companion to Nala.[1][2] When John attended a storyreel with this version in it, he was shocked at the romantic love song being sung by a warthog, and convinced the filmmakers that the song felt emotionally flat because a tender scene was played as a joke. This caused the song to be re-structured,[3] and placed back into the film combining the song being opened and closed with Timon and Pumbaa and Simba, Nala, and the "heavenly choir" sing the midsection.[2]

Timon:
If I said I love you


Timon:
Had you on my brain


Timon:
It would mean a romantic atmosphere
Had rendered me insane!


Timon:
It's only an example
It don't apply to us


Pumbaa:
Phew!
But over there
It's a different story


Timon:
And one we must discuss!


Both:
Oh, can you feel the love tonight?
Oh, the signs are there


Pumbaa:
A starry sky and tons of tenderness


Timon:
Disaster in the air!
And if he falls in love tonight


Timon:
It can be assumed


Timon:
His carefree days
With us are history In short


Both:
Our pal is doomed! 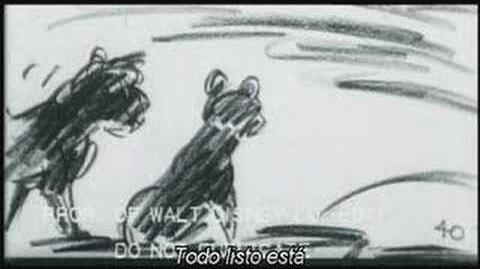 Retrieved from "https://lionking.fandom.com/wiki/Can_You_Feel_the_Love_Tonight_(Timon_and_Pumbaa)?oldid=249928"
Community content is available under CC-BY-SA unless otherwise noted.