This version of "Can You Feel the Love Tonight" is one of the fifteen drafts Elton John and Tim Rice wrote for the song. It is a love ballad between Simba and Nala.

In a story outline written in September 1992, back when the film was titled King of the Jungle, the song is played as Simba tries to convince Nala to stay with him in the jungle.[1] Prior to this, Simba had confessed his guilt regarding his father's death to her.

This version was test-screened on January 26, 1993, before the directors removed it, having decided that it was an "unearned" moment between Simba and Nala.[2] When Elton John attended a screening of the film with the song removed, he angrily petitioned to then-Disney studio chairman Jeffrey Katzenberg on the phone to place the song back into the film.[3] Additionally, Tim Rice explained to the Los Angeles Times that it would have been "difficult to animate a slow ballad which doesn't advance the plot in most of its forms".[4]

Simba:
There's a calm surrender
To the rush of day
When the heat of the rolling world
Can be turned away

Nala:
An enchanted moment
Any heart would fall
Paradise that I can't help wondering
Should I be here at all?

Chorus:
Can you feel the love tonight
Won't you stay to see
Stealing through the night's uncertainties
A truth for you and me

Nala:
Somewhere there's a reason
Why I have to go
Keep away from this star-crossed voyager
That I don't want to know

Simba:
Never trust the future
Never miss the past
If you live for the shining moment
The moment may just last

Chorus:
And can you feel the love tonight
It is where we are
It's enough for this wide-eyed wanderer
That we got this far 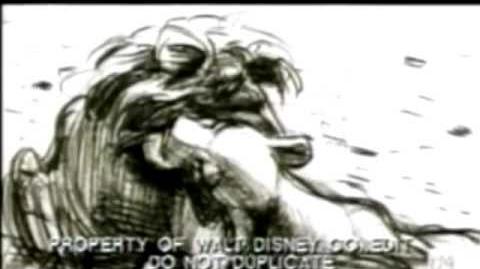 Retrieved from "https://lionking.fandom.com/wiki/Can_You_Feel_the_Love_Tonight_(Simba_and_Nala)?oldid=285004"
Community content is available under CC-BY-SA unless otherwise noted.