"When Simba leaves Kiara in charge of Pride Rock for the first time, Kion reluctantly agrees to obey her, which proves difficult when Janja tries to take advantage of Kiara's inexperience and hatches a plot to take over the Pride Lands."[1]

Kion and his sister, Kiara, are arguing over who gets to sharpen their claws on a tree when Simba approaches and tells Kion to back away, for Kiara is going to serve as the queen for the day. When Kion reacts with confusion, Simba explains that his presence is needed at a funeral in Kilio Valley for Aminifu, a wise old elephant who has passed away. Though Kiara is unsure of herself in acting as queen, Simba reminds her that he had been nervous to rule the Pride Lands on his own too.

While Kiara stays behind to watch over the Pride Lands, Simba meets with Nala and Zazu to begin his journey to Kilio Valley. Along the way, he worries over having to give a tribute in the elephant language, and Zazu brags over his own skill in mastering animal languages. Unbeknownst to the trio, they have been spied on by Mzingo, who resolves to keep an eye on the doings of the Pride Landers.

As Mzingo flies away, Simba begins to lament having kingly responsibilities, and Zazu reminds him of the perks of the job ("Duties of the King"). Afterward, he begins to coach Simba on his elephantese accent.

Back in the Pride Lands, Kion is ready to go on the morning patrol with the Lion Guard, but instead of joining his team, Ono simply flies over them en route to Pride Rock. The Lion Guard rushes after Ono, but when they arrive at Pride Rock, Kiara is given a royal announcement by her friends, Tiifu and Zuri. A thoroughly annoyed Kion asks Kiara what is going on, and she explains that she is getting the morning report from Ono since Zazu is absent.

Ono then reports that a herd of elands is moving along the river and that several new hives of bees have appeared on the trail along the river. Kiara quickly connects the dots and realizes that the elands will run right into the hives and thus incite chaos. She asks Kion to divert the herd rather than move the bees, and Kion reluctantly agrees.

Meanwhile, Zazu is attempting to teach Simba elephantese, but the king loses his patience and roars at Zazu, blowing him into a patch of grass. Nala dashes to her mate's side and reminds him that though he may not be an elephant, he is a king and that it is his duty to carry out this tribute to an old friend.

Eventually, Kion makes his way to the hives of bees, but instead of following Kiara's orders, he decides to move the bees. His plan backfires, and the bees chase the Lion Guard straight into the path of the elands, who panic and run away in fear. A bruised, defeated, and stung Kion returns to Kiara and tries to make the best of his report, but Kiara accuses him of having not listened to her orders. He is then forced to admit that not all of the elands cooperated with them, and Kiara implores him to listen to her next time.

As the cubs squabble, Mzingo reports back to Janja, explaining that Kion and Kiara are fighting in the wake of Simba's departure. Janja decides to take advantage of the family struggles and instructs Mzingo to take a special message to Kiara.

Meanwhile, Simba and Nala arrive at Kilio Valley, where they witness the elephant herd placing flowers on Aminifu's body. Though saddened by the passing of his friend, Simba resolves to give a proper tribute.

As Kiara looks out over her kingdom, Mzingo lands on the peak of Pride Rock and offers a peace proposal to the young queen. Though suspicious, Kiara listens as Mzingo tells her that Janja wishes to meet her at Broken Rock, which serves as neutral ground between the Pride Lands and the Outlands. Kiara promises to think the offer over, and Mzingo flies away.

When Kion hears about the proposal, he desperately tries to talk his sister out of it, but Kiara points out that Janja probably came to her because Kion is constantly running him off. Furious, Kion points out that she is not really the queen, but Kiara resolves to do things her own way. A frustrated Kion refuses to take part in her plan and runs off into the savanna.

As Kion storms away from his sister, he encounters the ghost of his grandfather, Mufasa, who encourages him to support Kiara. He gently reminds the cub that Kiara needs his help, especially when she is wrong, and Kion realizes that he had been wrong to abandon his sister. After thanking his grandfather, Kion races off to rejoin Kiara, but when he returns to Pride Rock, Tiifu and Zuri explain that Kiara has already gone off to meet with Janja. Gathering the Lion Guard, Kion sets out to stop her.

Across the savanna, Simba gives his tribute to the elephants, but instead of saying, "He had good on him," the standard elephantese tribute, he says, "He had poop on him." Though Simba is horrified at this turn of events, the elephants begin to laugh, and Aminifu's daughter, Ma Tembo, explains that her father always used to have poop on him and that it was often the cause of laughter. She then tells Simba that it is good to remember the fun times.

Having gotten a good head start, Kiara reaches Broken Rock, where Janja surrounds her with his cronies. Just in time, Kion arrives with the Lion Guard, and Janja flees. As the hyenas scurry away, Kiara admits that Kion had been right about Janja, and he reminds his sister that she had been right about the bees. With their argument settled, the siblings return home.

When Simba and Nala return home, Kiara asks how the tribute had gone, and Nala answers that everything had turned out fine. She then asks how ruling the Pride Lands had gone, and though Kiara begins to stumble over her words, Kion jumps in. He admits that there was trouble, but that it was nothing Kiara couldn't handle. He then proclaims that Kiara is going to make a great queen someday. 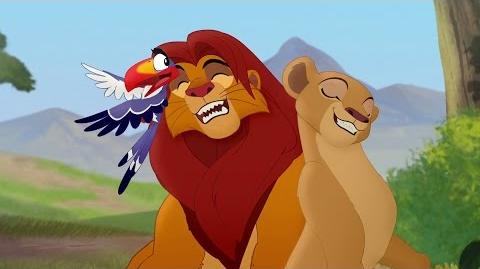 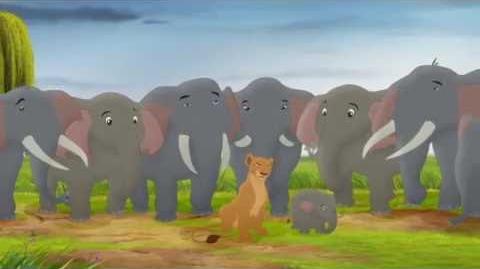 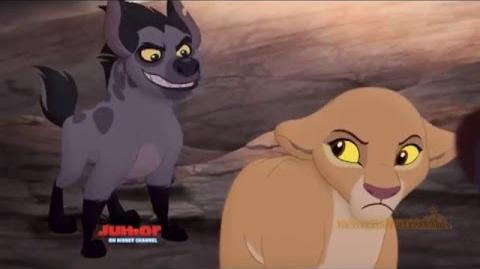 Retrieved from "https://lionking.fandom.com/wiki/Can%27t_Wait_to_be_Queen?oldid=302750"
Community content is available under CC-BY-SA unless otherwise noted.