"After waking up hungry, the three hyenas feast their eyes on one prize - a huge ostrich egg."[1]

The hyenas are sleeping in their cave. Shenzi wakes up, scratches her back with a bone, and then hits Banzai with the bone. Banzai then removes a carcass from Ed and then eats it. The hyenas then see an ostrich sitting on a large egg and the three decide to steal the egg for breakfast.

For their third attempt to steal the egg, the hyenas dig a tunnel, but they don't know which way to go. The ostrich intervenes and tells the trio that they should go left. The hyenas follow the ostrich, but realize that they got tricked as they fall and find themselves in China.

On their fourth attempt, the hyenas hire an elephant to flatten the ostrich so he can steal the egg for them. When the elephant approaches the ostrich, the bird removes one of her tail feathers to make the elephant sneeze and fall on the hyenas.

With all the attempts ending in failure, Shenzi tries to think of another way to steal the egg. She then gets an idea from Ed to disguise themselves as ostriches by using sticks, leaves, and mud. The hyenas, with their ostrich disguises, make the mother ostrich leave her egg to put her head in the sand. While she's doing so, the hyenas finally steal the egg, replacing it with a rock.

The hyenas are happy about their final attempt being successful, but then they start fighting over who gets to eat the egg. The egg then hatches and a giant baby ostrich appears, scaring the trio to a cliff branch. As he prepares to kill the hyenas by making them fall off the cliff, his mother shows up and reminds him that it's not nice to steal. She then gives the rock the hyenas replaced her egg with to the trio.

The rock makes the branch break and the hyenas fall down and find themselves in China once again. 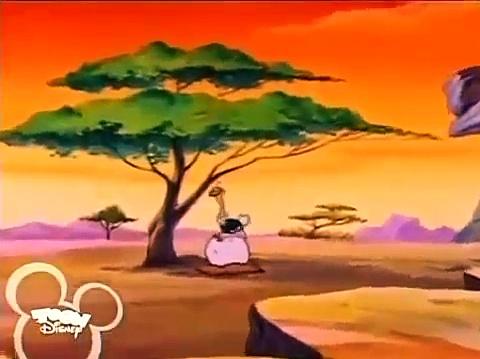 Retrieved from "https://lionking.fandom.com/wiki/Can%27t_Take_a_Yolk?oldid=296550"
Community content is available under CC-BY-SA unless otherwise noted.