Bupu's herd is a group of sable antelope led by Bupu. They live in the Pride Lands.

Ono informs the rest of the Lion Guard that a herd of sable antelope are refusing to leave their grazing grounds, even though another storm is on the way. Basi suggests that they lead the antelope to the other side of the Flood Plains, but Ono wonders how they will be able to cross the reeds. Basi reminds him that by the time the antelope arrive at the Flood Plains, Beshte will be done creating hippo lanes across the water. The Lion Guard thanks him for the idea and then leaves to save the herd.

Ono leads the Lion Guard to the sable antelope's grazing ground. Kion is quick to order the antelope out of their grazing ground, but their leader, Bupu, points out that they do not wish to leave. Fuli and Ono encourage the herd to leave before the rainstorm comes, but to no avail. In a last ditch effort, Kion informs the antelope that there will be more food away from their drowned grazing ground, and a female antelope named Boboka urges Bupu to reconsider the offer. He relents, and the herd follows after the Lion Guard.

On the way out of the grazing ground, Ono spots a rock slide, and Kion yells for the herd to stay back. Too late, the rocks fall, separating the Lion Guard from their charges. Kion worries over the herd's condition, but Ono reassures him that none of the antelope are injured. He then warns Kion that there is no other way around the rocks and that the storm is closing in fast.

In the face of this new setback, Fuli laments Beshte's absence, but Bunga points out that Kion can still use the Roar of the Elders to blow the rocks away. Kion agrees to the idea and climbs to the other side of the rocks in order to avoid harming the antelope.

Kion urges the antelope to move, but Bupu and his herd refuse to cooperate. Kion uses the Roar of the Elders to clear the boulders, but even after the path is clear, the antelope continue to stay put. With some harsh insistence from Fuli, Bupu and his herd reluctantly follow after the Lion Guard until the group reaches the edge of the Flood Plains.

The Lion Guard leads the antelope to the edge of the water, where Boboka and her son enter one of Beshte's hippo lanes. No sooner have they started to cross the Flood Plains when Ono arrives, forbidding the herd to enter the hippo lanes. Bunga tells Ono that Boboka and her son have already entered the Flood Plains, and Ono panics that they will get lost in the reeds. Kion quickly takes charge of the situation, entering the hippo lanes with Ono, while Bunga and Fuli stay behind with the rest of the herd.

At the edge of the water, Bupu laments not being in his home territory. Fuli attempts to quiet him, but Bupu simply sinks to his knees, prompting the rest of his herd to do the same. Furious, Fuli shoves Bupu from behind and orders him to stand up. As she does so, Ono arrives, incredulous at Fuli's actions, and she exclaims that she is simply trying to make the antelope stand.

At that moment, Beshte arrives, much to the excitement of his teammates. He starts to compliment his father on a job well-done when he notices that Basi is missing. Concerned, Beshte races back into the hippo lane in search of his father. Ono monitors Beshte's progress and marvels at the perfectly straight and true hippo lane that has been created. Bunga then announces to the herd that they can cross the Flood Plains safely.

At Bunga's announcement, Bupu complains that the herd will get wet if they cross the Flood Plains, to which Fuli shouts in exasperation that they are already wet. A stubborn Bupu dares her to continue yelling at them, and Fuli backs off, apologizing for her behavior and politely asking if the herd will follow the Lion Guard into the hippo lane. To her surprise, Bupu relents and tells her that they had only wanted the Lion Guard to be polite to them. He then rallies the herd to him, and they stampede into the Flood Plains.

The herd tramples over Makuu and his float, reaching safety on the other side of the Flood Plains.

When Mzaha, a rambunctious young antelope, proves to be too much of a handful for the herd, Bupu kicks him out.

Later, Fuli encourages Bupu to take Mzaha back, and he agrees to give the young antelope one last chance with the herd. However, the herd soon tires of Mzaha's antics, and, seeing their frustration with him, Mzaha leaves the herd for good.

The herd waits impatiently as their leader, Bupu, tries to free himself from an entanglement with a tree branch. After Bupu is freed by the Lion Guard, the herd moves on.

Boboka and another member of the herd enjoy a show put on by Tamaa the drongo, in which he impersonates members of his audience.

After Ma Tembo's herd is ousted from Kilio Valley from a fire, Kion requests that the herd temporarily stay with Bupu and his herd. Bupu adamantly refuses, asserting that the elephants are not welcome among his herd.

Frustrated, Kion orders Bupu to be patient with the elephants until the Lion Guard can come up with another solution. Bupu does not wait long, however, and soon ousts the elephants from his herd.

The herd follows Ono to Nyani Grove and away from the oncoming Army of Scar.

The Lion Guard rushes to stop Bupu's herd and Laini and her galagos from stampeding. Once calm, the groups admit to having been scared of a jackal attack, and the Lion Guard concludes that the Pride Landers must unite against the threat of the Outlanders. They gather together Bupu's herd, Laini's group, Ma Tembo's herd, and Mbeya's crash ("Pride Landers Unite!").

At first, the Pride Landers are tense, but Kion works to defuse the tension. He instructs the animals to race toward Bunga. However, the event soon gets out of hand, for the animals trip over the galagos and end up in a heap.

Kion then gets the idea to call Makuu the crocodile for help. Makuu begrudgingly agrees to help, but his training is too rigorous and ruthless for the other Pride Landers to master.

After the fight, Makuu thanks Bupu and his herd for their help and vows to return the favor should they find themselves in trouble.

The herd is present when Dhahabu arrives at Pride Rock to discuss a water treaty with Simba.

At Mizimu Grove, Rafiki and Simba announce Makini's mpando mpaya. In the midst of the celebration, the Army of Scar attacks, and the Pride Landers rise up to defend themselves. The battle pauses when Scar appears in the flames and threatens to overtake the entirety of the Pride Lands. Frightened by Scar's unexpected appearance, the remaining Pride Landers, including Bupu and his herd, flee Mizimu Grove.

At Pride Rock, Kion implores Bupu and his herd to follow him to Mizimu Grove before they decide to leave the kingdom. The herds follow Kion to Pride Rock, where Makini's baobab tree seed has survived the fire. This inspires the Pride Landers to remain in the kingdom and work together to defeat Scar.

Fuli asks the herd to join the Pride Landers in their fight against Scar. They accept and help defeat the Outlanders. Later, when the Lion Guard departs the Pride Lands for the Tree of Life, the herd bids them farewell.

Bupu's herd watches the Battle of the Lion Guards. They witness the final mashindano between Kion and Vitani. Later, they attend Kion's wedding to Rani. 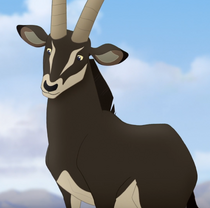 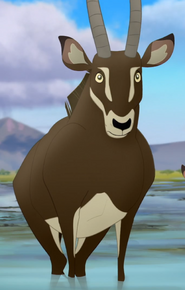 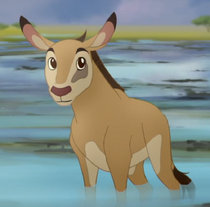 Boboka's son
Add a photo to this gallery
Former members 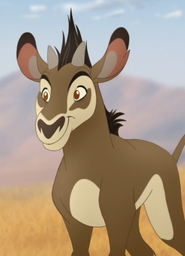 Mzaha
Add a photo to this gallery
Retrieved from "https://lionking.fandom.com/wiki/Bupu%27s_herd?oldid=291875"
Community content is available under CC-BY-SA unless otherwise noted.