"When Bunga and Simba are trapped underground, they discover a shared family background – they were both raised by Timon and Pumbaa."[1]

"Bunga and the King" begins by introducing Kion, the prince of the Pride Lands, and his parents, Simba and Nala, and sister, Kiara. At the start of the episode, the family is en route to Mizimu Grove to see the first elephant concert of the season. However, along the way, Ono swoops out of the sky and informs Kion that a group of antelope have gotten stuck in the mud near Chekundu Cliffs. Though reluctant, Kion finally caves to his duty as leader of the Lion Guard and goes to help the antelope.

The royal family continues on without Kion, but as they're walking, a sinkhole opens up beneath them. Simba is quick to save Kiara, but when he himself tries to climb free, he falls backward into the hole. Meanwhile, the Lion Guard is helping the antelope out of the mud when they hear the rumble of the sinkhole in the distance. Ono reports to Kion that Simba has fallen into the hole, and Kion leaves his team to make sure that his father is all right.

Back at the sinkhole, Simba emerges unharmed, but he is unable to climb out of the hole due to the steep walls. Just then, the rest of the Lion Guard arrives, and Bunga recklessly jumps into the sinkhole to save Simba. As the other members of the Lion Guard crowd around to see how steep the drop is, the walls begin to crumble, and Nala orders everyone to step away from the hole.

As the others debate outside the hole, Bunga makes several suggestions as to how they can climb out of the hole. At last, he decides to make a running start and tries to jump his way up the walls. His efforts, however, cause part of the walls to collapse, and both Bunga and Simba are buried in rock. A worried Ono swoops over the debris, but both animals make it out alive, and Simba berates Bunga for not thinking before acting.

Just then, Kion gets an idea and runs off with his friends. Simba tells Nala that she and Kiara should go on ahead to the concert, since Kion will be saving him shortly, and Nala reluctantly agrees. As Kiara and Nala depart, Kion and his friends arrive with a massive log and tip it into the sinkhole, but just as it hits the bottom of the pit, it splinters into hundreds of tiny pieces.

Shortly after Kion's plan fails, Bunga spots a tunnel in the side of the sinkhole, and Simba realizes that it could lead to Nandembo Caverns. He yells up to Kion, letting him know of his suspicion, and Kion agrees to travel through the entrance of the caverns, while Bunga and Simba climb through the tunnel to meet them. The two groups split off, and Simba follows Bunga into the tunnel.

As they're crawling through the tunnel, Simba becomes frustrated with Bunga for picking random routes without assessing whether they are the best options to take. The two spiral into an argument until they become so frustrated with one another that they peel off in different directions. While Bunga takes the wrong tunnel, Simba comes to realize that he is going the right way. Realizing this, he has a change of heart and goes back to ensure that Bunga makes it out safely.

While the two struggle to find each other, Bunga begins to sing "Hakuna Matata", and Simba sings with him until the two converge in an open cavern. Once there, Simba explains that Timon and Pumbaa had sung that song to him many times while he was growing up, and Bunga realizes that the two are like brothers and apologizes to Simba for yelling at him.

Meanwhile, Timon and Pumbaa have been brought by Kion into the tunnels, where they begin to cry over their two lost "babies". Bunga and Simba happen to hear their cries, and the two race through the caverns until they reach a large ravine that cuts them off from Kion and his friends. Simba gets an idea, and with Bunga on his back, he leaps across the ravine to safety. There, Timon and Pumbaa greet their adoptive sons, and Kion is shocked to realize that Bunga and Simba have reconciled their differences.

Across the Pride Lands, the elephants finish their concert, and Kiara and Nala congratulate them on their performance. Just then, Simba arrives with the Lion Guard, Pumbaa, and Timon, and he apologizes to Ma Tembo and her herd for being late. In order to make it up to them, Simba suggests that they sing a song dear to his heart, and the animals break into a happy rendition of "Hakuna Matata". 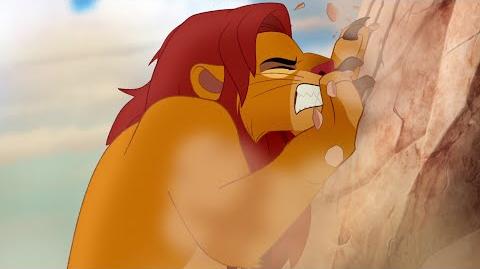 Lion Guard- The Sinkhole! - Bunga and the King HD Clip
Simba falls into a sinkhole 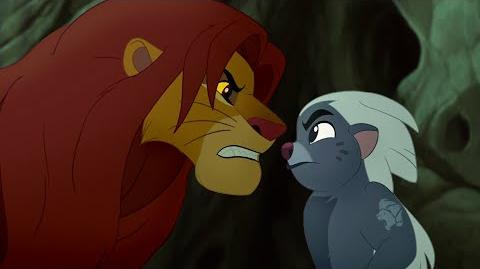 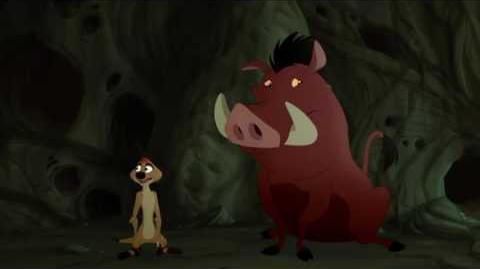 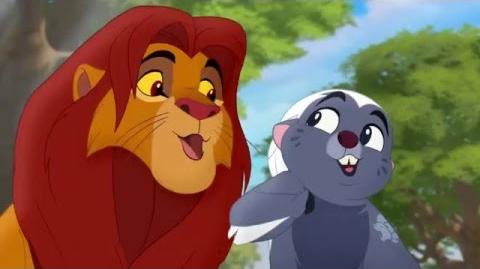 Retrieved from "https://lionking.fandom.com/wiki/Bunga_and_the_King?oldid=286129"
Community content is available under CC-BY-SA unless otherwise noted.