"Big Jungle Game" is the second segment of the third episode of Season 3 of The Lion King's Timon & Pumbaa. It aired on January 15, 1999, alongside "Lemonade Stand Off".

"Pumbaa decides to compete in an Olympic jungle race to live out a dream he had!"[1]

Pumbaa is competing in an Olympic jungle game, where he races against an elephant, a gorilla, a gazelle, and a cheetah. While he is racing, he ends up tripping and sliding, making the other animals win the race. It then turns out to be a dream and Timon tries to wake his friend up to go to a brunch buffet where they have bugs.

Pumbaa wakes up and tells Timon that he had a destiny in his dream and suggests that he should compete in the jungle game. He decides to practice his running skills while making Timon time him, but the meerkat shows that he can outrun his friend. While Pumbaa is running trips over a snail and ends up rolling all the way to a pond. Despite his unsuccessful running practice, Pumbaa still decides to compete in the jungle game.

When Timon and Pumbaa are at the game, Timon tries to convince his friend that competing is like work and therefore not Hakuna Matata, but Pumbaa argues that it is. The warthog then tries to introduce himself to the other competitors, but gets pushed by all of them. Later that night, the Olympic jungle game's opening ceremony takes place.

The first event is the 100 Meter Jungle River Freestyle. While Pumbaa swims in the river, a crocodile eats a piece of his pool toy, causing it to blow the warthog out of the river.

The second event is the Coconut Shotput. In this event, Pumbaa tries to lift a giant coconut ball. When he succeeds and wonders where he can put it, the elephant bounces the coconut and throws it in the air.

The third event is the Long Jump Over Quicksand. Before Pumbaa starts jumping, Timon tells his friend that he is getting creamed and suggests that he should call it a day, but Pumbaa insists on continuing whether he wins or not. The warthog jumps, but doesn't go far enough. Luckily, he lands next to the quicksand, but the elephant falls on him.

The fourth event is the Banana Tree High Jump. Pumbaa succeeds in this event, but gets crushed by the elephant again.

While Pumbaa is physically injured, Timon tells him that according to the scores, he tied the gazelle with the high jump and got 3rd place for outswimming the crocodile, so he can still win the competition. But Pumbaa decides to give up his dream, believing that he can't win a race against the cheetah. But Timon admits that he was just jealous of him and that he had a destiny all along. He then forces his friend to show everyone that he can win the race. Listening to his friend's words, Pumbaa believes in himself and decides to race the cheetah.

When the race starts, the cheetah outruns Pumbaa and the warthog starts getting tired. Worried about Pumbaa not winning the race, Timon remembers himself saying that while he can outrun his friend, he can't outroll him, which gives him an idea. He decides to trip Pumbaa so that he can roll all the way to the finish line.

Pumbaa wins the Olympic jungle game, proud of himself for living out his dream. Timon then imagines the different prizes Pumbaa can earn, which would lead to himself being rich. 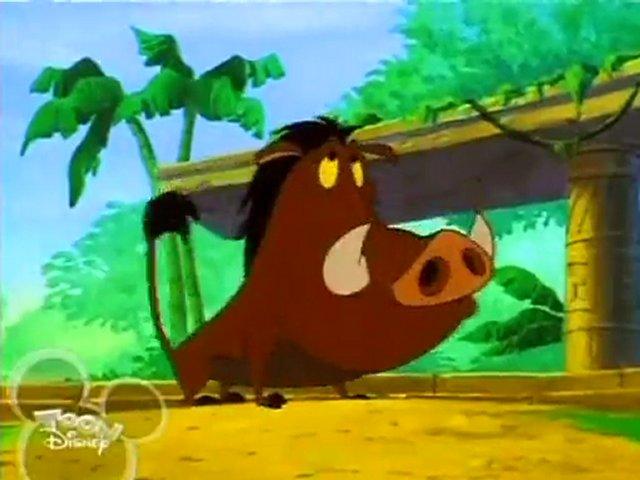