"Beware the Zimwi" is the nineteenth episode of Season 1 of The Lion Guard. It aired on October 14, 2016.

"When tales of a mysterious creature plague the Pride Lands, the Guard must conquer their fears and track down the elusive beast."[1]

A group of young animals gathers at Rafiki's tree for a story about the Zimwi, a legendary creature that stalks the Pride Lands during the full moon. To the young ones' horror, Bunga points out that the moon is full that night, and Rafiki warns the group that they may soon hear the Zimwi's call.

Just then, the group hears a loud bellowing noise, and Kion demands that the maker of the noise show himself. Beshte emerges from the brush and explains that he is practicing his bellowing for an audition with the Bellow Fellows, a group of hippopotamuses.

With the young ones' fear abated, Rafiki continues his story by singing "Beware the Zimwi", in which he describes the Zimwi as being an eight-legged creature as tall as two giraffes, with long spikes and large teeth. Though the others young animals are frightened by Rafiki's story, Kion scoffs at the notion of the Zimwi being anything more than a tall tale. Rafiki bids the young ones good night and warns them to not let the Zimwi bite.

On the way home, Mtoto questions whether the Zimwi can be real or not, and Kion points out the ludicrousness of a creature having eight legs. No sooner has he spoken when a gust of wind howls past, frightening the group. Kion assures his friends that it is just the wind and suggests that the little ones sleep together that night in order to feel safe. Beshte proposes that they do the same, and Bunga invites the rest of the Lion Guard to sleep with him at Hakuna Matata Falls.

Later that night, a rustling in the underbrush scares Mtoto and his friends, who awaken the Lion Guard and tell them that they have sighted the Zimwi. Kion doubts their claims, but finds himself interrupted by Timon, who explains that his mother's cousin's friend had known an ox who was eaten by the Zimwi. The young animals wonder what they should do, and Kion asserts that he and his team will sniff out the Zimwi in order to keep the Pride Lands safe.

Together, the Lion Guard sets off in search of the Zimwi. Along the way, they debate whether the Zimwi is real or not, with Kion retaining his disbelief that such a creature could exist. As the team searches, they are startled by a group of genets, whom Bunga frightens with descriptions of the Zimwi. After the genets run off, Kion chastises Bunga for unnecessarily frightening the genets and instructs him to not tell anyone else about the Zimwi.

The Lion Guard's search continues, during which they run into a panicked Thurston. Bunga assumes that Thurston is running from the Zimwi, but Thurston states that the Zimwi is nothing more than a story and explains that he had been spooked by the genets. The very thought of the genets spins him into a panic, and he takes off again into the forest.

The team moves on, but along the way, they are frightened by Beshte's continued bellowing practice. Kion reminds the team that there is still no sign of the Zimwi, and Ono jokingly comments that he doesn't know who is scarier: Beshte or the Zimwi.

As the hunt persists, Kion pauses and remarks that he feels like something is watching them from the bushes. He orders his team to fan out, and once they have the underbrush surrounded, he yells for them to move in. His shout frightens some gazelles who are sheltering in the bushes, and they beg the Lion Guard not to hurt them, for they had simply been hiding. Beshte asks what they had been hiding from, and the gazelles reply that they had spotted the Zimwi and taken shelter in the vegetation.

The gazelles point out a shadow against a nearby ravine, and the Lion Guard sees the outline of a tall, spiked figure. Bravely, the team strides into the gorge, where they come face-to-face with what appears to be the Zimwi. In a panic, they flee the ravine and startle the gazelles, who begin to gallop about the clearing. Kion instructs Beshte to flatten a patch of bushes to allow escape from the glen, and the gazelles pour out into the open, where they run about without threat of hurting themselves.

With the gazelles safe, Kion expresses shame for having run from the Zimwi. He admits that he had not been frightened of the monster because he had not believed it could exist, but the moment he had seen it for himself, he had reacted like a coward. He reminds his friends that they are the Lion Guard and cannot run away, to which the others brace themselves for the coming confrontation with the Zimwi.

As one, the Lion Guard faces off against the Zimwi. To their horror, the Zimwi's head falls off its body and splits into two, revealing two young porcupines. A shocked Kion asks if the porcupines had been hiding from the Zimwi, and the rest of the team pieces together that Mtoto and his friends had seen the two porcupines huddling together and mistaken them for the Zimwi. Ono adds that the Zimwi's "body" had been nothing more than a giant termite mound.

The next day, Beshte braces himself for his audition with the Bellow Fellows. He admits to being scared, and Kion points out that he had had the bravery to face the Zimwi. In better spirits, Beshte comes before the Bellow Fellows and completes a series of bellows. The Bellow Fellows react with delight, and together, they bellow with Beshte. 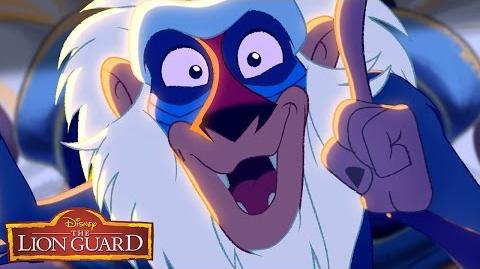 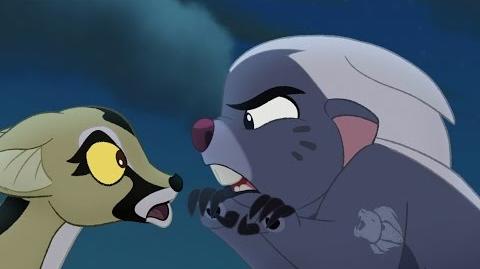 Lion Guard Search for the Zimwi! Beware the Zimwi HD Clip
The Lion Guard searches for the fabled Zimwi 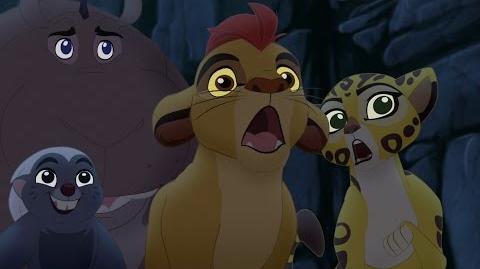 Lion Guard THE ZIMWI! Beware the Zimwi HD Clip
The Lion Guard uncovers the true identity of the Zimwi
Add a photo to this gallery

Retrieved from "https://lionking.fandom.com/wiki/Beware_the_Zimwi?oldid=286094"
Community content is available under CC-BY-SA unless otherwise noted.