"Beshte and the Beast" is the twenty-fifth episode of Season 2 of The Lion Guard. It aired on November 12, 2018.

The gorilla introduces himself as Shujaa and explains that the king of the Theluji Mountains, Sokwe, had sent him to assist the Lion Guard. He then explains his talents in destruction and strength ("Shujaa Ponda"). The Lion Guard explains that Beshte is the strongest in the Pride Lands, to which Shujaa eagerly asks for a demonstration. Although reluctant, Beshte throws a large boulder at Shujaa, who catches it and throws it back, nearly hitting Beshte and Ono.

Just then, Ono informs the Lion Guard that the crocodiles, hyenas, and jackals are attacking Big Springs. Alongside Shujaa, the team races to the rescue and confronts the invaders. However, before the Lion Guard can step in, Shujaa heaves boulders and trees at the Outlanders, effectively driving them away from Big Springs. In the process, he destroys the nearby area, blocking aardvark dens, trapping hares in mud, and tangling oryx's horns. Though Shujaa is upset, the Lion Guard resolves to clean the mess.

In the Outlands, Scar hears of Shujaa's destructive nature and orders his army to keep attacking the Pride Lands in order to prompt Shujaa into committing more devastating acts.

Back in the Pride Lands, the Lion Guard finishes cleaning up Big Springs. No sooner have they finished when Ono alerts them that the crocodiles, hyenas, and jackals have returned to hunt a herd of sable antelope. Kion suggests cutting through Nyani Grove, which inspires Shujaa to charge through the grove and begin clearing a wide path. In doing so, he knocks the baboons from their trees, and they charge into a herd of cape buffalo, inciting a stampede. Beshte and Fuli rush after them to calm them, while Kion, Bunga, and Ono follow Shujaa.

As Shujaa approaches the Outlanders, Janja realizes that Scar's plan is working, as the gorilla is causing massive destruction. Kion enters the scene behind Shujaa and orders the sable antelope to move. He then uses the Roar of the Elders to blast the Outlanders away.

Beshte and Fuli return, and the Lion Guard laments the state that Nyani Grove is in. Kion explains to Shujaa that he does not know his own strength, and Beshte offers to teach the gorilla what he knows. Shujaa agrees, and the two move off together to train.

Beshte and Shujaa encounter Laini and her fellow galagos in a tree, where they are suspicious of a serval on the opposite branch. The serval admits to being stuck, and Beshte questions Shujaa as to what they should do. Shujaa suggests uprooting the tree, but Beshte urges him to think more closely about the problem. This leads Shujaa to bend the branch of the tree down to the ground so the serval can clamber to safety. The plan works, until Shujaa lets go of the branch, catapulting Laini and the galagos into another tree.

Despite Shujaa's disappointment, the two move on to help a butterfly whose wing is stuck under a mound of rocks. Shujaa thinks on the problem, then removes the stones from around the butterfly's wing, effectively freeing it. Elated at his victory, Shujaa pounds on the rest of the rock mound, which frees a large boulder and sends it careening into the ground. Beshte saves Shujaa just in the nick of time.

The two move on to where Kifaru is lost in a canyon, blind and lost without the assistance of his tickbird. Shujaa realizes that Kifaru wants to reach a watering hole, which is just on the other side of the canyon, and punches a hole through the rock to allow Kifaru easy access. However, the rock gives way to reveal two hyraxes whose home had been built in the destroyed canyon wall. Beshte encourages Shujaa, reminding him that they can find a new home for the hyraxes, but Shujaa despairs over his inability to help other animals.

As Beshte delivers the hyraxes to their new home, Shujaa laments his destructive nature and resolves to never help again, lest he hurt more animals. Beshte urges Shujaa to not give up, but the gorilla refuses to move, even when Ono arrives with news that Big Springs is under attack and has been set ablaze. Beshte is forced to leave for Big Springs on his own.

Beshte arrives and orders the hippo pod to stay in the water while he deals with the fire. Together, the Lion Guard works to put out the blaze and fight the invading Outlanders, but in the midst of the fight, Beshte injures his leg and is unable to move. Ono begs Shujaa for help, and the gorilla agrees to fight for the sake of Beshte.

Shujaa arrives to find Beshte collapsed on the ground. He thinks carefully on the solution, then lifts Beshte in his arms and sets him next to the water. He then defeats the Outlanders with his strength and uses dust to put out the last of the fire.

The Lion Guard praises Shujaa for his quick thinking and comment that they are glad that Sokwe had sent him. This makes Shujaa realize that he has never demonstrated his ability to think to Sokwe, and he resolves to return and show his leader what he has learned. Before leaving, he promises to help the Lion Guard if they should ever need him again. 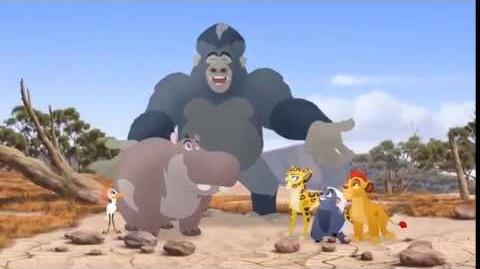 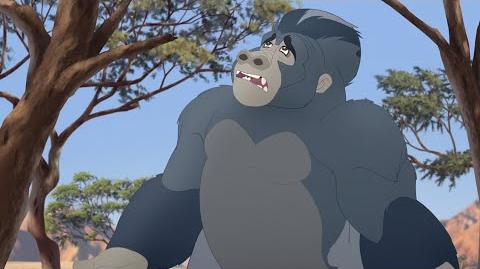 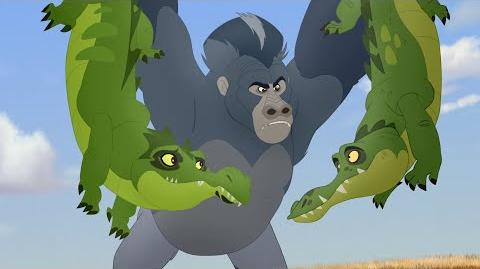 Retrieved from "https://lionking.fandom.com/wiki/Beshte_and_the_Beast?oldid=229560"
Community content is available under CC-BY-SA unless otherwise noted.