"Beast of Eden" is the first segment of the fifteenth episode of Season 2 of The Lion King's Timon & Pumbaa. It aired on October 26, 1996 on CBS' Saturday morning line-up, alongside "Sense & Senegambia".

"Mistreated by some natives, Timon and Pumbaa team up with a magical beast in order to exact their revenge."[1]

Timon and Pumbaa are being pushed down a slide by the three natives and their leader into a "bottomless pit," where the two fall for weeks on end before finally hitting the ground. At the bottom of the chute, Pumbaa comments that the bottomless pit isn't so bottomless after all, which prompts Timon to proclaim that they will be rich for finding the first bottomless pit with a bottom.

As the two set out across the cave, they are confronted and eaten by a giant monster, who immediately spits them back out. Once rid of the two, the monster wails about his missing gold tooth, which holds the key to his magical powers. Pumbaa feels sorry for the monster, but Timon only finds interest in the monster's great power.

Two hours, two days, and two weeks later, the monster manages to shove Timon and Pumbaa through the top of the bottomless pit, where they promise to help him retrieve his gold tooth from the native chief. The two proceed to launch many different attempts to steal the tooth from the native chief - digging underground and stealing his staff, replacing the staff with a candy cane, setting a tiger on the chief, drawing the leader to the bathroom - but each attempt ends in failure.

The two then launch a new set of attempts, the first of which involves the duo dressing up as photographers and using their cameras to make the chief feel dizzy. The plan works initially, as Timon and Pumbaa manage to blind the chief and steal his staff, but then a real photographer shows up and blinds Timon and Pumbaa, giving the chief time to catch up to them and reclaim his staff.

For their second attempt, Timon and Pumbaa set up a table in front of the leader with three bowls on top, one of which is covering the gold tooth. In the same manner as Three-card Monte, Timon mixes up the bowls and asks the chief to choose the one concealing the tooth. As requested, the chief chooses the correct bowl, his luck staying consistent throughout the next few games. Unable to give up, Timon calls for one last shot at the end of each game but finds himself interrupted by a policeman, who arrests him and Pumbaa for gambling.

As a last resort, Timon and Pumbaa fake a parade and convince the natives to join in on the festivities. As the four are distracted, Timon switches out the leader's staff with a harmonica and commands the natives to turn about face and march in the opposite direction. It is not long, however, before the natives realize that Timon and Pumbaa have stolen their tooth, after which they pursue the duo to the edge of the bottomless pit.

Although they manage to catch Pumbaa by the legs, the tooth flies out of the warthog's mouth and falls into the bottomless pit. Moments later, the monster bursts out of the pit, his gold tooth in place, spewing fire at the natives. As the natives are blasted in rage by the monster, Timon and Pumbaa walk calmly away, happy about their victory over the chief. Pumbaa then shows Timon that he has one of the leader's teeth in his mouth. 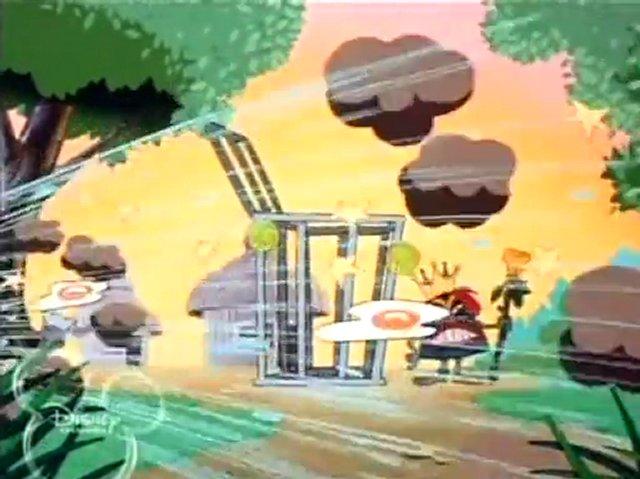