The Battle of Pride Rock is the final confrontation between Simba and Scar, as well as their respective armies. The battle starts when Scar admits that he'd killed Mufasa and ends when the hyenas betray and kill Scar.

Following the death of Mufasa, Scar takes the throne, allowing the hyenas to invade the land, causing a terrible famine in which the herds flee the Pride Lands. One day, Scar calls Sarabi to him, asking her why the lionesses are not hunting. After she criticizes him and compares him to his late brother Mufasa, he strikes her across the face. A young adult Simba, who had been observing from the shadows, springs from hiding in his mother's defense. Scar and Sarabi mistake him for Mufasa, but he reveals his true identity as Simba. The young lion then corners Scar and orders him to step down, to which Scar turns Simba's attention to his hyena army, who appear out of the shadows, protecting him. Nala soon appears, and the Pride Landers stand by Simba, who confronts Scar and gives him a choice: step down or fight. Trying to avoid a conflict, Scar persuades Simba to confess to the murder of his father Mufasa. Simba cannot defend himself due to remorse, and admits to his "crime", much to Sarabi's horror. Scar takes advantage of the situation and slowly corners him at the edge of Pride Rock.

There, Simba slips off the edge, hanging over the promontory. Lightning strikes the dry grass below, igniting a fire. Scar notices similarities between father and son and sinks his claws into Simba's paws, much like he had done to Mufasa years ago. Scar then admits that he had killed Mufasa, which sparks rage within Simba. With new strength, Simba hurls himself up onto Pride Rock and pins Scar to the ground, accusing him of the murder. Scar tries to weasel his way out of the situation, but Simba chokes him, forcing him to admit what had really happened. The hyenas begin to attack Simba, allowing Scar to slink away. The lionesses understand that the war has begun and proceed to attack the hyenas.

While Scar escapes, the hyenas bear down on Simba, but Nala rears forward to help him. The lionesses and the hyenas begin to fight each other. Pumbaa and Timon run into the crowd and begin to fight with the hyenas, applying techniques that were used to take on vultures many years ago. Some hyenas corner Simba, and one bites his neck, but Rafiki saves him by bashing the hyena in the head with his stick. The old baboon then demonstrates his impressive fighting skills as one hyena tries to attack him from behind, and he strikes the hyena in the face. The fire begins to surround and slowly engulf Pride Rock, causing some hyenas to run off, whilst others are cast off into the flames to their deaths. Unaffected by the blaze, Banzai and Shenzi chase Timon and corner him in the royal den. Timon tries to escape into Zazu's cage, but the hyenas surround him. At the last moment, Pumbaa appears, and Banzai calls him "pig," infuriating him. The warthog charges the hyenas, chasing them out of the cage, and Timon and Zazu escape, unharmed.

Simba breaks free from the battlefield and catches his uncle fleeing into the shadows. The young lion manages to trap Scar on the summit of Pride Rock, where he readies himself to take revenge for Mufasa's death. Scar begs Simba for forgiveness and places the blame on the hyenas, who overhear him and back away, growling. Simba expresses mistrust in his uncle, but says that he will not kill Scar and thus become like him. However, he banishes his uncle from the Pride Lands, telling him to "run away and never return," quoting his uncle's words from years ago.

Unwilling to accept this punishment, Scar hurls hot embers into Simba's eyes and attacks him while he is blinded. For a few seconds, Simba is down, but he quickly gets up and engages Scar in a brutal fight. A hard smack from Scar sends Simba on his back. Scar then leaps to deliver the final blow, but Simba defeats Scar and throws him off the edge of Pride Rock. Scar lands in the smoldering embers at the base of Pride Rock before coming to his feet and seeing Shenzi, Banzai, and Ed appear. Scar is pleased to see them, but they soon reveal that they'd overheard Scar's failed attempt to betray them and make it clear that they are no longer allied with him. More of the defeated hyenas appear and surround their former master as he desperately pleads for his life. In hunger and vengeance, they attack and devour him alive as the flames rise around and engulf them.

While Timon and Pumbaa create a diversion in the form of a hula dance in front of the hyenas, Nala and Simba freely reach Pride Rock. The hyenas chase Timon and Pumbaa into a cave, where Pumbaa releases a massive wave of gas, causing the hyenas to flee. When Timon and Pumbaa triumphantly get out of the cave, Ma and Uncle Max appear. Ma and Timon enthusiastically embrace, but Max looks disgusted by Timon's hula costume. Timon introduces Pumbaa to Ma and Max. Shortly afterward, Pumbaa notices Scar and Simba at the edge of Pride Rock. Timon thinks that the two are simply having a friendly discussion as uncle and nephew, but then Simba slips over the edge, hanging from the promontory, while lightning strikes the base of Pride Rock, igniting a fire. This makes Timon realize the gravity of the conflict.

After a few seconds, Simba manages to leap over the edge and violently pin Scar down, and the hyenas advance on Simba, protecting Scar. Timon says that he has a plan to help Simba, and Ma offers her and Max's help. Timon cheerfully says that their task will be to dig a lot of tunnels through Pride Rock. He says that his and Pumbaa's task will be to draw the hyenas away from Simba and lure them into a trap.

When Scar sees Simba, he runs off. Simba goes after him, only to be followed by the hyenas, who attack and corner him. Timon and Pumbaa appear and tell a joke about Scar's army. Shenzi threatens them, and the two flee, whilst Simba slips away to the summit of Pride Rock to confront Scar.

The hyenas manage to catch up to and surround Timon and Pumbaa, mocking them. The two try to stall the hyenas with juggling and dancing, but it does not work, so Timon proposes to Shenzi. Like the other plans, it fails. Just then, Ma and Uncle Max finish a trap tunnel, and Max kicks out one of the tunnel supports, which falls and takes out the rest in a series, destroying the tunnel and creating a hole underneath the hyenas, who back away from the incoming ground cavity. However, the crack suddenly stops expanding as one of the support beams hits an embedded rock, and the hole doesn't finish. Uncle Max and Ma pop out of the hole and stand by Timon and Pumbaa, giving themselves up with their allies.

As more hyenas appear, ready for the kill and closing in, Timon looks at the ground beneath the hyenas, noticing where the crack ends. He steels himself, then runs headlong at Shenzi, aiming between her legs. He dives into the crack and rushes along with it, dodging Shenzi's jaws. He dives for the last tunnel support, and it crumbles on impact. The ground under the hyenas' paws gets crushed, and Shenzi, who jumps at Pumbaa, falls into the hole. Her allies fall after her. At that moment, Pumbaa, Ma, and Uncle Max see Simba defeat Scar and throw him off Pride Rock, where he meets the defeated hyenas below.

Simba, a full-grown adult, returns home to the Pride Lands with Nala. Timon and Pumbaa arrive shortly after and distract the hyenas, while Simba, Nala, and Zazu hasten to Pride Rock. Once there, Simba sees Scar demanding that Sarabi be his queen. She refuses yet again, and Scar attacks her viciously.

Simba intervenes, protecting his mother and ordering Scar to back off. Initially mistaking him for Mufusa, Scar quickly realizes that Simba is alive and declares that the hyenas recognize him as the rightful king now. Nala argues that the pride stands with Simba, and Simba offers an ultimatum to Scar: step down or fight. Instead of giving in, Scar accuses Simba of killing Mufasa and calls him a coward, pressing him until he submits. He backs Simba to the edge of Pride Rock until he is hanging only by his claws above a wildfire. Believing he has won, and seeing the similarities between father and son, Scar tells Simba that he had seen the same fear in Mufasa's eyes, before telling him that he had killed Mufasa.

Enraged, Simba grabs Scar's mane and pulls himself up onto Pride Rock. Simba demands that Scar tell the pride of his crimes. Scar refuses, accusing Simba of wanting to kill him as well as Mufasa, but Simba denies his lies. Sarabi question's Scar's claim that he had not reached the gorge in time to save Mufasa and then exposes his lie. Simba calls Scar a murderer, to which Scar furiously orders the hyenas to kill the entire pride, starting with Simba.

The hyenas surround and attack Simba, but the lionesses attack, which escalates into a full-blown war. The flames surround Pride Rock, and many hyenas flee. Meanwhile, Pumbaa and Timon manage to escape the hyenas, only to be cornered again. One hyena calls Pumbaa "chubby," which enrages him and motivates him to fight back, saving himself and Timon. Nala confronts the hyena matriarch, Shenzi, and engages in a fierce battle with her, before defeating her and throwing her off Pride Rock. When Zazu is cornered by five hyenas, Rafiki joins in the fray, using his staff to defeat the hyenas that have cornered Zazu.

Meanwhile, Scar sees his army fleeing and slinks off. Simba catches view of him and gives chase. He manages to corner Scar at the summit above the flames, but Scar begs for forgiveness and mercy, turning the blame on the hyenas, calling them "revolting scavengers," and claiming that he had been planning on getting rid of them. Simba refuses to believe Scar's lies, but spares his life regardless, not wanting to become the monster that Scar is. Instead of killing him, he commands that he leave the Pride Lands forever. In answer, Scar attacks Simba, and the two fight. Simba defeats Scar and throws him off Pride Rock into the smoke below, where he meets the defeated hyenas.

At first, Scar is relieved to see the hyenas, and declares that they will re-build their army, but Azizi and Kamari reveal that they had heard Scar's insults and his "plans" to murder them. Realizing his mistake too late, Scar desperately claims that he was only trying to fool Simba and that the hyenas will rule with him. Shenzi emerges from the smoke and coldly tells Scar that there was only one true thing he had ever said: A hyena's belly is never full. More hyenas appear and surround Scar before attacking him. Cornered and outnumbered, Scar attempts to defend himself against his former allies, but is quickly overwhelmed and screams in agony as he is devoured alive.

Add a photo to this gallery
Click here to view the rest of the gallery. 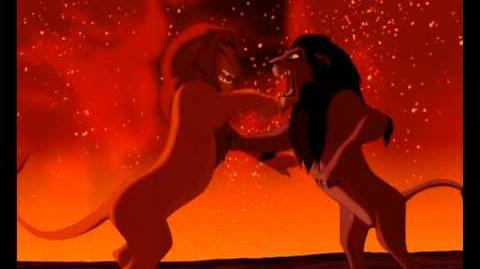 Retrieved from "https://lionking.fandom.com/wiki/Battle_of_Pride_Rock?oldid=290673"
Community content is available under CC-BY-SA unless otherwise noted.