Basi's pod is a group of hippopotamuses led by Basi. They live in Big Springs, a water hole in the Pride Lands.

Several younger members of the pod gather around Beshte as he pushes a large rock into the water. The hippos enjoy the wave it creates.

When Beshte gets covered in mud, he brings his friends to Big Springs, where the pod is milling around lazily. Once there, Beshte demonstrates how the fish pick the mud off the coats of the hippopotamuses, even opening his mouth to let the fish pick through his teeth. Basi joins his son and is approached by Pua, the leader of the crocodiles, who asks if his float is allowed to eat from the water. Basi tells Pua to come back next week, and Pua amicably agrees.

However, as Basi's pod watches, Makuu challenges Pua to a mashindano, which Basi explains as being a crocodile tradition that determines who reigns over the float. The hippopotamuses can later be seen watching the mashindano, and Basi explains to his son that Pua will be exiled for losing the fight.

Once Makuu rises to power, he and his float force Basi's pod out of Big Springs, and they move to the water hole of the elephants. However, with Kion's help, they are moved back into Big Springs, and Basi offers to let Makuu share their waters once the fish are ready. Makuu promises to keep Basi's offer in mind.

When Fuli's friends grow worried that she's spending too much time alone, they try to include her in their family activities. Beshte does his part by inviting Fuli to cool off in a water hole with him and his pod, but when he accidentally knocks Fuli into the water, she departs in a fury.

Basi and his son Beshte create hippo lanes across the Flood Plains so that animals can cross safely from one side to the other. During the task, Basi is injured, and Beshte is tasked with completing the hippo lanes himself. At first, Beshte messes up by creating twisty lanes rather than straight ones, but with Basi's help, the two manage to complete the lanes.

Beshte helps two members of the pod get free of a mud pit.

The pod takes part in the "The Twelve Ways of Christmas" performance.

Ono informs the Lion Guard that the crocodiles, hyenas, and jackals are attacking Basi's pod at Big Springs. Alongside Shujaa, the team races to the rescue and confronts the invaders. However, before the Lion Guard can step in, Shujaa heaves boulders and trees at the Outlanders, effectively driving them away from Big Springs.

Later, Ono informs Beshte and Shujaa that Big Springs is under attack and has been set ablaze. Beshte is forced to leave for Big Springs on his own. Beshte arrives and orders Basi and the hippo pod to stay in the water while he deals with the fire. Together, the Lion Guard works to put out the blaze and fight the invading Outlanders, but in the midst of the fight, Beshte injures his leg and is unable to move. Ono begs Shujaa for help, and the gorilla agrees to fight for the sake of Beshte. The Lion Guard and Shujaa manage to put out the remainder of the fire.

At Big Springs, Basi's pod is spooked by the antics of a baby hippopotamus named Kiazi. Beshte quickly calls a false alarm, and Basi notes that the Pride Landers have been on edge due to the recent Outlander attacks.

At Mizimu Grove, Rafiki and Simba announce Makini's mpando mpaya, and Timon and Pumbaa perform their song ("Tujiinue"). In the midst of the celebration, the Army of Scar attacks, and the Pride Landers rise up to defend themselves. The battle pauses when Scar appears in the flames and threatens to overtake the entirety of the Pride Lands. Frightened by Scar's unexpected appearance, the remaining Pride Landers, including Basi and his pod, flee Mizimu Grove.

Simba approaches the Pride Landers once the Lion Guard has calmed them and admits that he has had knowledge of Scar's return for some time. Basi disapproves of his dishonesty, though Ma Tembo notes that she understands why he'd kept it a secret. The herds deliberate whether they should leave the Pride Lands, and Simba tells them to inform him of their decision the following morning at Pride Rock.

At Pride Rock, Kion implores Basi and his pod to follow him to Mizimu Grove before they decide to leave the kingdom. The herds follow Kion to Pride Rock, where Makini's baobab tree seed has survived the fire. This inspires the Pride Landers to remain in the kingdom and work together to defeat Scar.

Basi's pod welcomes Beshte home from the Tree of Life. They greet him at Big Springs. Later, they attend Kion's wedding to Rani. 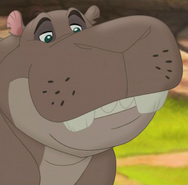 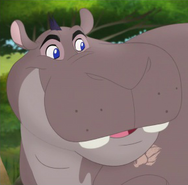 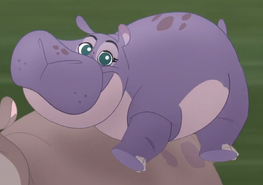 Kiazi
Add a photo to this gallery
Retrieved from "https://lionking.fandom.com/wiki/Basi%27s_pod?oldid=291874"
Community content is available under CC-BY-SA unless otherwise noted.