Timon and Pumbaa are arriving in the Australian Outback via parachute. The moment the lift touches the ground, Timon bursts into the open, fantasizing about all the different types of bugs that will be available to them in the Outback. Pumbaa shows similar excitement but is disappointed when Timon tells him that the two must split up in order to find their true potential. Begrudgingly, the warthog allows the split.

While hunting, Timon runs into a blue land crab, which he mistakes for a giant bug. The meerkat attempts a fight to the death with the crab, but the crab is disgusted and chases Timon away by blowing him into a giant pretzel and letting him loose to the air. Unwilling to give up, Timon chases after the crab and attempts to beat him with a spiked bat. Once again, the crab dispatches of Timon by using the meerkat's own weapon against him. He then proceeds to beat Timon with every kind of tool the meerkat produces until Pumbaa manages to distract Timon long enough for the meerkat to hide in his friend's mane. After seeing how troubled Timon is, Pumbaa offers his help to the battered meerkat, but Timon promptly refuses the offer, wanting to take on the crab himself.

With Pumbaa gone, the meerkat launches more assassination attempts on the crab, all of which end in failure. After a particular attempt, in which the crab manages to outsmart Timon using the meerkat's own elaborate trap, Timon gives up and collapses on the sand. Pumbaa bounces up to his friend in good spirits and begs Timon to come meet his new friend, who's been helping him catch multitudes of bugs in the Outback. Too tired to argue, Timon follows the warthog until he figures out that Pumbaa has been getting help from the land crab, whose name is revealed to be Bruce. Scared for his life, Timon flees while Pumbaa and his new friend share a good laugh. 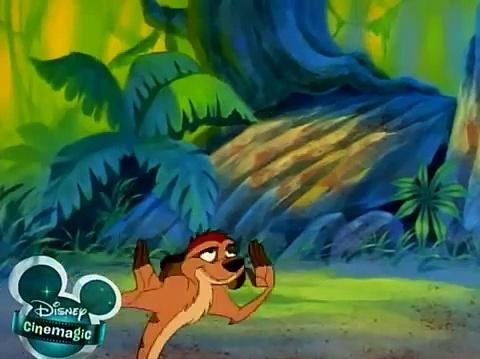 Retrieved from "https://lionking.fandom.com/wiki/Back_Out_in_the_Outback?oldid=296527"
Community content is available under CC-BY-SA unless otherwise noted.