"Baboons!" is a song composed by Beau Black for The Lion Guard. It premiered on September 23, 2016, in the episode of the same name.

When Fuli, a member of the Lion Guard, is tasked with delivering a baby baboon home, she accepts the task reluctantly. Along the way, the baby baboon jumps off her back into a tree, and Fuli exasperatedly attempts to coerce him into continuing their journey. As the infant leaps from tree to tree, deliberately trying to annoy her, Fuli sings "Baboons!", in which she laments his inability to act seriously or respect her authority. 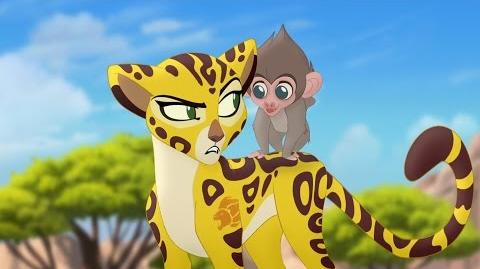 Lion Guard Baboons! Song Baboons! HD Clip
The "Baboons!" sequence in The Lion Guard
Add a photo to this gallery
Retrieved from "https://lionking.fandom.com/wiki/Baboons!_(song)?oldid=290300"
Community content is available under CC-BY-SA unless otherwise noted.