The troop furiously pursues Fuli after she comments that they look funny when they scratch their heads. They are eventually halted by Beshte, after which they accept Fuli's apology.

During a rainstorm, the baboon leader and his troop take shelter in a tree on the edge of a cliff. The Lion Guard begs the baboons to come down, but the troop refuses to cooperate until the rains stop.

Eventually, Kion grows so desperate that he sends Bunga up the tree to release his flatulence and force the baboons down. The plan works, and the baboons jump down the tree just before it collapses.

After rescuing a baby baboon, Fuli comes to Nyani Grove and speaks to the baboon leader, who informs Fuli that the baby baboon does not belong to their group. Rather, he belongs to the baboons of Mapango Cliffs, who live at the very top of a steep ridge.

Though loathe to travel so far, Fuli begrudgingly sets out to return the baby baboon home. On her way out of the grove, she is told by the baboon leader to bring a message to their cliff neighbors, after which the troop begins to pelt her with fruit.

The troop scatters when Kifaru blindly rams into their tree.

In the midst of following Ma Tembo, who is looking for a new water source, the baboon leader and his troop are attacked by Janja's clan. Luckily, the Lion Guard intervenes and Kion uses the Roar of the Elders to blast the hyenas away.

After the fiasco, the troop continues to follow Ma Tembo.

The troop takes part in "The Twelve Ways of Christmas" celebration as the "ten baboons burping".

Ono alerts the Lion Guard that the crocodiles, hyenas, and jackals are hunting a herd of sable antelope. Kion suggests cutting through Nyani Grove, which inspires Shujaa to charge through the grove and begin clearing a wide path. In doing so, he knocks the baboon troop from their trees, and they charge into a herd of cape buffalo, inciting a stampede.

The troop is present when Dhahabu arrives at Pride Rock to discuss a water treaty with Simba.

The troop bids the Lion Guard goodbye as they depart the Pride Lands for the Tree of Life.

When Fuli and Azaad return to the Pride Lands, the troop swarms and jumps on them excitedly. 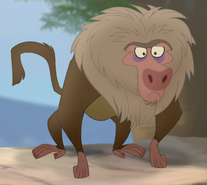 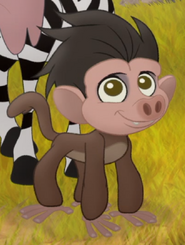 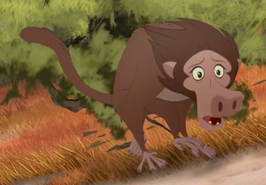