"Astro-Nots" is the second segment of the twelfth episode of Season 3 of The Lion King's Timon & Pumbaa. It aired on March 19, 1999, alongside "Bigfoot, Littlebrain".

"Timon and Pumbaa take a trip to NASA so that they can travel to Mars and find bugs."[1]

Pumbaa is sitting at a tree stump with silverware in hoof, preparing to eat. Timon walks in with a silver platter and sets the tray in front of Pumbaa, who eagerly rips off the covering. To the warthog's dismay, his "dinner" is a tiny, shriveled-up bug. Annoyed, he berates Timon, who claims to have hunted all day for the small insect.

Desperate for food, Pumbaa attempts to drill through red rocks from Mars, informing his friend that the newspaper believes that bugs are hidden inside Martian rocks. When Timon hears the name "NASA" (National Academy for the Study of Ants), he begins to believe Pumbaa's tale and suggests that the two go to Mars to find bugs. Pumbaa tells Timon that Mars is another planet, but the meerkat believes that it is located in Texas, east of El Paso and named after Hector Mars. Timon and Pumbaa then read in the paper that NASA is currently looking for people who want to go to Mars, free, making the two prepare to go to the company.

Upon arriving at the NASA air station, Timon and Pumbaa are interrogated about their interest in going to Mars. The duo strike a deal with the NASA leaders, agreeing to be astronauts if they are fed bugs in return for the trip. The agreement is settled, and Timon and Pumbaa are dropped through a hole in the floor.

First, the meerkat and the warthog are subjected to a physical overview by doctors. They are then put through various spurts of astronaut training. Only after passing all their tests are Timon and Pumbaa allowed to go to Mars. However, upon realizing that they are going to be shot into space in a rocket, the two attempt escape from the air station. Together, the meerkat and the warthog hide in a box full of bugs. The doctors soon catch on to their plan and use a crane to lift the bug box into the rocket.

The rocket is launched, with Timon and Pumbaa screaming inside, and crash-lands on the planet Mars. Timon and Pumbaa climb out of the rubble of the rocket and begin to explore the planet, keeping their eyes open for Martian bugs. Not long into the search, the two are approached by giant aliens, who claim to be the bugs millions of years into evolution. The aliens tie up Timon and Pumbaa and roast them over a fire. Defeated and humiliated, the duo admit that they had intended to catch bugs, not be caught by them. 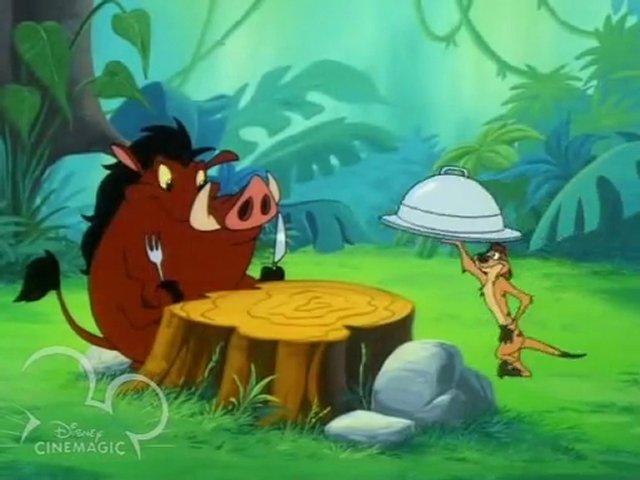