Timon and Pumbaa are entering a farm where a sign reads "Captain Oinker's Pig Farm: The Home of Mr. Pig". As the two view the sign, a procession parades past in honor of a huge pig sitting astride a wagon at the caboose of the group. The pig introduces himself as Mr. Pig, and Pumbaa politely echoes the introduction, calling himself Mr. Pig as well. In answer to Pumbaa's greeting, the pig sniffs rudely and proclaims that Pumbaa is not a Mr. Pig but a nobody.

Enraged, Timon hops onto the wagon and asks the pig how he earned himself the right to be called Mr. Pig. Equally angered, the pig uses his staff to smack Timon into the Mr. Pig sign, which explains that the pig has been the reigning champion of the Mr. Pig contest for 25 years. No sooner has Timon absorbed this information when a rooster lands on a nearby fence and announces that the contest is about to begin.

Come nightfall, Pumbaa is disheartened by his constant losing to Mr. Pig. Though Timon tries to cheer him up, Pumbaa only stays on the farm because he feels honor-bound to the competition, even though he knows that he is going to lose the final round.

The next morning, the rooster announces to the gathering that the final round has commenced. He shows the contestants a foot with numbers on its toes, naming the round "This Little Piggy", where the contestants must do what the rooster says; otherwise, they lose. At the start of the first task, Timon tries to convince Pumbaa to cheat, but the warthog promptly refuses. Unwilling to give up, Timon decides to secretly cheat himself.

Toe #2: This little piggy stayed home. Pumbaa is forced to stay in a house, watching television all day, while Mr. Pig lounges in his mud surrounded by his trophies. In secret, Timon sets up a fake phone call, telling Mr. Pig that he won a free trip to Pago Pago. Mr. Pig is overjoyed and eagerly falls for this trap.

Toe #3: This little piggy had roast beef. As Mr. Pig and Pumbaa gorge themselves on roast beef, Timon slips a sausage into Mr. Pig's hoof, and the champion unintentionally eats the wrong food, earning himself another lost competition.

Toe #4: This little piggy had none. A bowl of food is placed in-between the contestants, who are disallowed to touch it. In order to get Mr. Pig to eat the food, Timon snaps a mousetrap on his tail and dumps the food into his mouth as he screams in pain.

As Pumbaa stands proudly on a pedestal, declared the new Mr. Pig, Timon tells his friend that he cheated to help the warthog win. Infuriated, Pumbaa yells at Timon for violating his trust, and the other barn animals surround the argument, taking in this new information with consternation. Unable to keep the crown, Pumbaa returns it to angry Mr. Pig, and the rooster declares punishment on Timon, giving him the option to either leave forever or stay imprisoned on the farm for the rest of his life. Timon is eager to go, but Pumbaa refuses to leave until the meerkat promises to never cheat again. Although Timon swiftly makes the promise, he suddenly crosses his fingers behind his back, marking his promise an obvious lie. 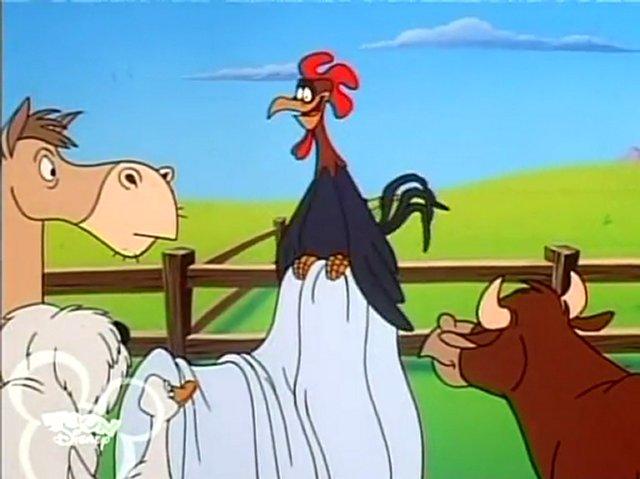