"Amusement Bark" is the second segment of the eighteenth episode of Season 2 of The Lion King's Timon & Pumbaa. It aired on November 9, 1996 on CBS' Saturday morning line-up, alongside "Rome Alone".

"Timon and Pumbaa must work at an amusement park to pay for some damage they haven't caused."[1]

Timon and Pumbaa are arriving at an amusement park called Boss Beaver's Log Land, arguing over which activity they should do first. After believing Pumbaa to have pulled a trick on him, Timon declares that he wants to do Pumbaa's choice of activity, which is to buy a souvenir.

The duo enter the souvenir shop, and Timon begins to complain about the "overpriced junk." Pumbaa, however, bounds eagerly into the store, yelling his excitement to the world. Timon sighs and begins to wait for his friend to finish shopping. Not long into his wait, the meerkat is approached by a young beaver, who declares that he doesn't like meerkats. The beaver proceeds to drop a sign on Timon and hammer his toes, after which the meerkat's actions accidentally wreck the entire store.

When Boss Beaver attempts to make Timon pay for the damages, Timon angrily declares that he hasn't broken anything. Boss Beaver, however, refuses to hear his objections and immediately sets Timon and Pumbaa to work. After setting the two up at a local restaurant, the boss leaves the duo to make "hot logs on a stick" for eager customers.

As Timon and Pumbaa are working, the same beaver from the souvenir store approaches and turns the dial that dispenses the manufactured logs to its highest setting, making Timon and Pumbaa's job impossible. Though Timon wrestles with the controls in an attempt to turn the machine back to normal, the machine explodes, leaving the business in ruins. Boss Beaver appears directly after the accident, yelling that Timon and Pumbaa will pay for these repairs as well.

Later, Timon and Pumbaa are hired to drive the monorail. As Pumbaa is navigating, Timon continuously spots the mischievous beaver hiding in the driver's compartment. The meerkat's attempts to catch the little rascal distract Pumbaa, who, in turn, crashes the monorail. Naturally, Boss Beaver makes his appearance shortly after the crash, declaring that they must now pay for the monorail, too.

Now wearing beaver costumes, Timon and Pumbaa are set to work on holding a giant beaver balloon for the park boss. Timon proceeds to complain to Pumbaa about the annoying young beaver. No sooner has he made his complaints when Timon spots the beaver walking past. As the meerkat takes chase, Pumbaa finds that he cannot support the weight of the balloon and subsequently begins to float high into the air. As the balloon passes a nearby building, it catches on a weather vane and pops, landing directly on a humiliated Timon and Pumbaa.

After the accident, Boss Beaver orders Timon and Pumbaa to take his son, Boy Beaver, for a ride on the Log Flume. Upon seeing the child, however, Timon identifies him as the true cause behind all the accidents. Pumbaa quickly interrupts Timon and graciously agrees to take the child on the ride. When the three arrive, Timon and Pumbaa climb into the ride, expectant of a good time, but the little beaver ties up the man at the controls and takes over the ride completely, leaving Timon and Pumbaa at his mercy.

The ride goes crazy under Boy Beaver, nearly killing Timon and Pumbaa, until the child is caught in action by his father, who scolds his son. When the ride comes to a stumbling halt, with Timon and Pumbaa falling through the floor, Boss Beaver expresses his concerns that he may be sued if they're injured. Timon and Pumbaa, however, agree to not press legal charges so long as they can purchase the park and have the two beavers be their new workers. Boss Beaver and his son are shuttled back to the local restaurant, where an injured Timon and Pumbaa turn the dial of the "hot logs on a stick" machine to its highest setting. 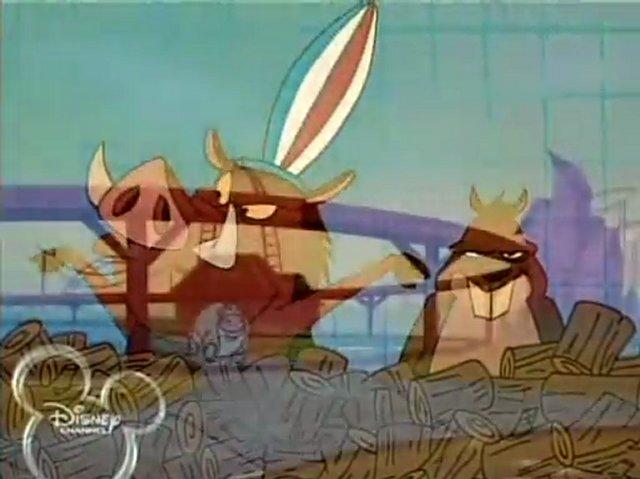