"Timon declares that he and Pumbaa are charmed, because they've never been eaten by a predator... yet."[1]

Timon and Pumbaa are being chased by an angry panther. In order to evade the fearsome feline, Pumbaa hops across a river, and Timon "flushes" the panther down the stream. Elated at their close victory, Timon jeers at the cat as he is carried down the river. Pumbaa, however, is concerned about the close call. Despite his friend's fears, Timon brushes the remark aside, claiming to be "charmed in a lucky, fortunate type way."

No sooner has Timon bragged about his good luck when the cat reappears and chases the duo into a hollow tree. Pumbaa immediately descends into panic, as the panther remains poised outside the sole entryway, but Timon is convinced that they can climb the tree and jump from bough to bough in escape. Their plan, however, is cut off by the panther, who chops down all the trees in their area.

After this first failure, Timon devises a series of different escape methods, all of which Pumbaa refuses. At last, the two settle on making a run for it, but the panther chases them right back into their hollow tree. Dejected and defeated, the two make up their minds to simply wait the predator out. Days pass, during which Timon and Pumbaa try to entertain themselves in an attempt to forget their hunger. Days become months, and months become years, and still, Timon and Pumbaa refuse to venture out of the tree.

At last, in the year 2090, after an elderly Timon and Pumbaa nearly eat each other, the two decide that they would rather die as friends than as mad enemies. Together, the two exit the tree, proclaiming to the panther that they're ready to be eaten. The great cat, however, has grown too old and informs the friends that he can only eat mush and prune juice. He can, however, still chase them, so the two race off into the sunset with the panther in pursuit. 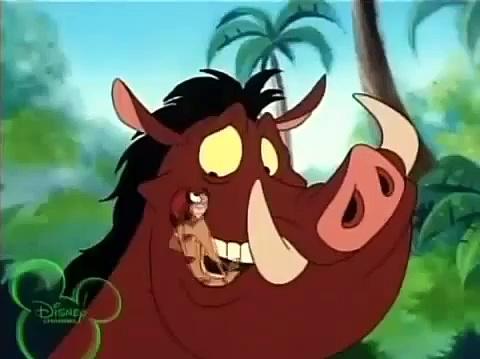 Retrieved from "https://lionking.fandom.com/wiki/Amazon_Quiver?oldid=296544"
Community content is available under CC-BY-SA unless otherwise noted.