All Pets Are Off

"All Pets Are Off" is the first segment of the fourteenth episode of Season 3 of The Lion King's Timon & Pumbaa. It aired on April 2, 1999, alongside "Boary Glory Days".

"Timon tries to devise a plan to make Pumbaa and himself pampered pets of New York City."[1]

Timon and Pumbaa are chasing a cockroach through the streets of New York City. In the midst of the chase, the bug races past a rich woman and her pampered poodle. As the woman and her dog jump out of the way, screeching, Timon and Pumbaa make a final dive for the bug, only to have it escape right underneath their paws.

After recovering from the defeat, Timon overhears the distressed woman promising her dog anything the pooch desires. Inspired, the meerkat proclaims to Pumbaa that they should become pampered pets so they can be given anything they want by their owners. Though Pumbaa initially mistakes Timon's proposition as a desire to have hair like the poodle's, he is soon cleared of his misunderstanding. As always, the faithful warthog agrees to follow Timon's plan.

The two are walking down the city streets in search of rich people when a limousine pulls up to the curb. A little boy climbs out and complains to his butler about the size of his huge mansion. Moved by his sadness, Pumbaa exclaims to Timon that the boy must be lonely. Timon twists his friend's words by pointing out that they should follow the boy home and be his new pets in order to settle his loneliness. Pumbaa agrees to the plan, and the two fall into step behind the boy. It's not long before he notices their presence, after which he orders his butler to let him keep them.

Now in kinship with the boy, Timon and Pumbaa take part in many luxurious activities, including massages, games, and giant feasts. At first, the two enjoy themselves greatly, but come lunch, the two are served processed meals scientifically proven to enhance animal diet. After lunch, Timon raves to Pumbaa about the low quality food. The two devise a plan to eat out at a restaurant, but in the midst of their escapade, the boy walks in, explaining to his pets that the house is "preteen proof," as he'd once escaped into the city streets and used his father's credit card to purchase a professional baseball team. Still blissfully unaware of the distress of his pets, the boy invites the two to play croquet with him.

A bit later, Timon and Pumbaa attempt another daring escape in which they pile furniture to the roof near an open vent. The boy, however, shows up and mistakes the pile for a game of King of the Mountain. He grabs Pumbaa, pulling the warthog to the floor and collapsing the massive heap of furniture. The butler enters at this moment but does nothing about the mess. Instead, he grabs the boy by his ear and drags him away for bath time.

With their annoying owner gone, Timon and Pumbaa devise a new plan to get outside. Using Pumbaa's tusk to poke a hole in the side of the house, Timon plugs in a nearby vacuum cleaner and sucks in all the cockroaches gathered on the balcony railing. The plan backfires, however, when the vacuum begins to suck in everything in close proximity, from the window curtains to Timon and Pumbaa themselves. At last, the vacuum can hold no more, and the device explodes, scattering shattered glass and broken furniture across the room.

At this moment, the butler walks in, only to stand, agape, staring at the mess. Throwing open the door, the enraged man kicks Timon and Pumbaa out of the house. The boy proceeds to protest but then admits that they are wild animals and should roam free. After getting kicked out of the house, Timon and Pumbaa land in a dumpster full of cockroaches. In a frenzy, the two take chase. 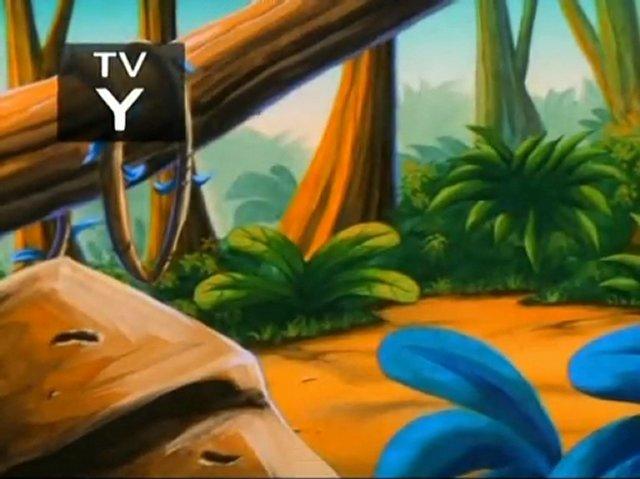