"Africa-Dabra!" is the first segment of the eighth episode of Season 2 of The Lion King's Timon & Pumbaa. It aired on September 30, 1996 on the syndicated Disney Afternoon block, alongside "I Don't Bolivia".

"In need of an act for the Serengeti Star talent contest, Timon and Pumbaa meet up with a magic rabbit."[1]

Timon and Pumbaa witness a group of animals advertising an upcoming talent show. While Timon is elated at the prospect of entering the talent show and becoming a famous icon, Pumbaa shows reluctance to the idea.

Just then, a magic rabbit appears before the duo, struggling to get out of his magician's hat, but Timon pulls him out with ease. This prompts the rabbit to propose that he and Timon team up to win the talent show, to which Timon delightfully accepts. Pumbaa interjects his complaint at being left out, and Timon informs the rabbit that Pumbaa must be involved in their act as well. The rabbit reluctantly agrees.

Together, the three perform numerous magic tricks, but Pumbaa continually ruins the act. At last, the rabbit loses his patience and tells Timon that they must get rid of Pumbaa, lest he ruin their chances at succeeding in the talent show. A horrified Timon refuses and declares that the only way he would remove Pumbaa from their act is if the two were no longer best friends. This gives the rabbit an idea.

The rabbit approaches Pumbaa and fabricates a story about Timon no longer wanting Pumbaa to be in their act. As Pumbaa breaks into sobs, the rabbit snaps his fingers and magically transports Pumbaa to the South Pole. He then tells similar lies to Timon and proclaims that the two must continue with their act alone.

With Pumbaa gone, Timon and the rabbit have marvelous success with their act, ranking first in every competition. Despite the popularity of their act and his rising stardom, Timon continues to lament the loss of his friend, while Pumbaa lives a lonely existence in the South Pole.

On the night of the final contest, Timon sits alone in a room, grieving Pumbaa. At the same moment, Pumbaa wonders why Timon would no longer want to be his best friend. Suddenly, he realizes that Timon had never said such things to him, but rather the deceitful rabbit. Fueled by rage, Pumbaa races away from the South Pole to the site of the talent show.

Once there, he disguises himself as an electrician and gains access backstage. He then lures the rabbit away from Timon with a carrot and traps him in a bamboo cage. Meanwhile, Timon attempts to pull the rabbit from a hat for his audience, but without the rabbit there to assist him, is unable to complete the act.

The audience begins to laugh at Timon's failed attempts to pull the rabbit from the hat, until Pumbaa rushes in, dressed as a rabbit, and pops out of the hat. The audience cheers, and Timon and Pumbaa are declared the winners of the talent show. An astounded Timon questions Pumbaa as to where he had obtained his rabbit suit, to which Pumbaa blushes. Backstage, the rabbit sulks sadly in his cage, having been stripped of all his fur. 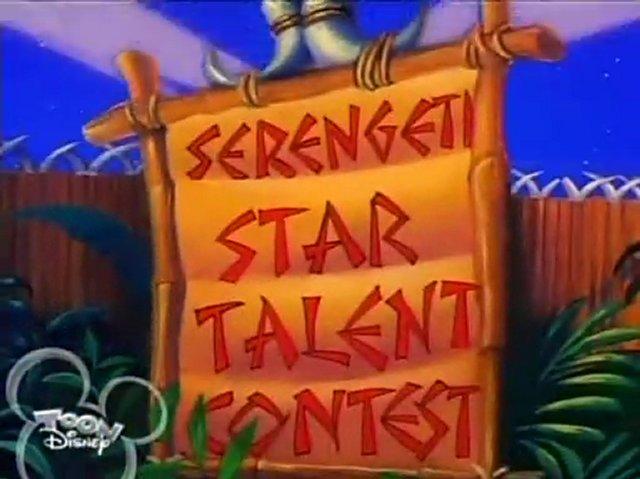