Adventures in Typing with Timon & Pumbaa is an educational typing computer game inspired by The Lion King. It was released in 1998 by Disney Interactive Studios, Inc.

Finger placement, home row technique, editing mistakes and lots of good typing habits – learn all this and more as you progress through five exciting and challenging activities. Throughout your typing adventure, get private lessons from Rafiki, and plenty of laughs from wild and wacky Timon and Pumbaa.

In the dense jungle of Hakuna Matata, Timon and Pumbaa wander past Rafiki, who is using a keyboard. They declare that they are embarking on an adventure, to which Rafiki suggests that they take his keyboard with them. They refuse, insisting that they are in a hurry, and Rafiki worries that they will get into trouble.

After their encounter with Rafiki, Timon and Pumbaa run into a trio of grubs, who start harassing Pumbaa by throwing berries at him. He retaliates by shooting berries at them through a hollow bamboo shoot, but the grubs manage to escape down holes in the dirt.

With the grubs gone, Timon and Pumbaa leave the jungle to cross the desert. However, Pumbaa faints from dehydration along the way. A worried Timon drags his friend to a water contraption and attempts to get the machine running, but it proves to be a difficult task. He eventually gets the machine to work, but becomes frustrated with its intricacies and implores Pumbaa to leave with him.

Together, the two return to the jungle in search of food and find an oasis teeming with grubs. They gather the grubs onto a leaf, then stand triumphantly in the midst of the oasis, with Timon flaunting their accomplishments. However, they take off in a hurry when some hungry frogs gather nearby.

Timon and Pumbaa travel to a cave, where they encounter a pair of hyenas, from whom they flee. Once to safety, they pause beside a stone wall to catch their breath and express their desire to return home. This prompts a mask on the wall to come to life and offer its help in completing their journey. With the mask's assistance, the wall is brought down in front of Timon and Pumbaa, revealing their watering hole, and they at last return home, where they sing "It's Good to be Home Again" with their jungle friends.

Adventures in Typing with Timon & Pumbaa is an educational typing computer game, designed for children ages six and older. The game is played almost entirely with keyboard mechanics, though minimal mouse movements are available in the final section.

The game is split into 15 lessons. Each is designed to teach a specific facet of keyboarding. They are as follows:

In-between lessons, the player participates in typing activities. They are as follows:

The Traveler's Tales activity
Add a photo to this gallery 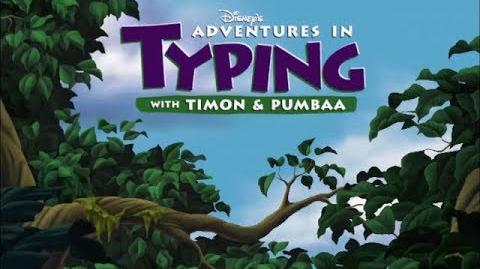